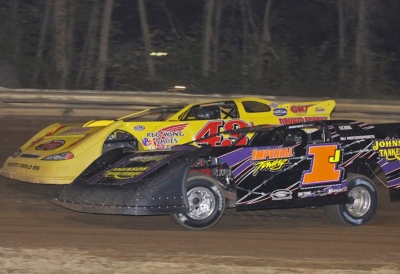 CUMBERLAND, Md. (Oct. 4) — Jason Covert of York Haven, Pa., stormed back into the lead before the halfway point to earn a trip to victory lane at Sunday's Big Kahuna IX at Allegany County Speedway. Covert seized control on lap 22 of the 50-lap feature and worked traffic without a hitch to claim his second Big Kahuna win. The victory was worth $10,000.

Covert ran second to D.J. Troutman of Hyndman, Pa., until the frontstretch lights shut off on lap 21 for the second time on the evening. Covert credited the caution and delay while the lights warmed up for the chance to pull a stubborn fender away from his tire. He put the lights out on the rest of the field after lap 30.

Covert was outstanding on the restart and pulled away by two seconds to the victory ahead of Johnson. Johnson had taken second from Troutman on lap 24.

Troutman, who shot by Covert to get the lead after an early caution, led until lap 21. Covert went to the high side on lap 19 and pulled even with Troutman before the caution set up Covert’s winning pass on the high side again on lap 22.

Troutman finished third. Gary Stuhler of Greencastle, Pa., was fourth and Jeff Rine of Danville, Pa., rounded out the top five. Two of the early frontrunners had early exits. Outside front-row starter Jack Pencil of Bedford, Pa., suffered a mechanical issue just after taking the green. Austin Hubbard of Seaford, Del., lasted only until lap three.