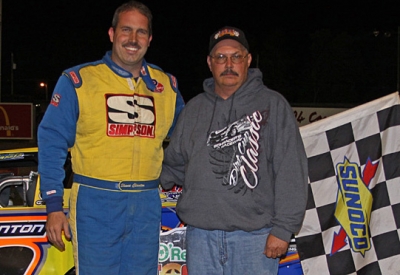 ALMA, Ohio (Oct. 3) — A few weeks ago, Shane Clanton of Locust Grove, Ga., was on the verge of heading into the off-season with a one-victory season. After the inaugural World Cup Classic at K-C Raceway, Clanton is suddenly heading toward winter on a hot streak after winning back-to-back $20,000 races. | Slideshow | World Cup Classic notebook | World Cup Classic prelims

The Southern driver who captured last weekend's Magnolia State 100 in Columbus, Miss., headed to the Buckeye State and led the final 88 laps of the O'Reilly All Star Series event, fighting off a late challenge by Eddie Carrier Jr. of Salt Rock, W.Va., for a rich victory.

"We've struggled just a little bit all year, but the last couple weeks have made up for it," said Clanton, who got past polesitter and early leader Brandon Kinzer of Allen, Ky., on a lap-22 restart. "My crew, these two guys here (Jonathan Owensby and Brant Hardin), have stuck with me and we've worked hard to get here. It's great to win this first Dirt Cup Classic here at K-C. It was a little cool for the fans, but we appreciate (track promoter) Jeff (Schrader) and the fans giving us a chance to race for this type of money deal."

After taking the lead, the third-starting Clanton held steady control at the 3/8-mile oval most of the way before Carrier turned up the heat late. Carrier took second from Duane Chamberlain of Richmond, Ind., on the 79th lap and nearly pulled alongside Clanton a few times in the final 20 laps.

"I saw Eddie up there in turn four and I thought I need to get a little lower," Clanton said. "He made me get up on the wheel and push it a little harder. But he raced me clean and I hope it made a great race for the fans."

Carrier, who initially tried to work underneath Clanton, switched to the high groove in the final laps, but he couldn't find the traction to make a serious charge.

"I thought we were going to get him there, but it just didn't happen," said Carrier, a two-time O'Reilly All Star winner at K-C in 2009, including a $5,000 victory two weeks earlier.

Carrier settled for second with Kinzer nearly getting in the mix in the final laps in finishing third. Steve Shaver of Vienna, W.Va., who started 11th, ended up fourth while Steve Casebolt of Richmond, Ind. rallied from his 11th-row starting spot to finish fifth ahead of a fading Chamberlain.

Rob Blair of Titusville, Pa., started outside the front row and ended up 10th, but it was enough to overtake Boom Briggs of Bear Lake, Pa., for the O'Reilly All Star championship. Blair won by six points over Briggs, who dropped out with mechanical problems on the 35th lap and ended up 19th after leading the points virtually all season long.

Kinzer took the lead from his pole position while Blair dropped back to fourth at the outset. After Kinzer stretched his lead early, Clanton caught him amid traffic after a dozen laps while Chamberlain and Carrier gave chase.

Coleby Frye's lap-22 flat brought out the first of six yellows, and that proved Kinzer's undoing on the restart as Chamberlain slipped underneath on the double-wide restart, eventually dropping Kinzer to fourth behind Clanton, Chamberlain and Carrier.

After lap 35 and 36 cautions for Briggs and Jared Hawkins, Clanton maintained command on Chamberlain before fast qualifier Josh McGuire's race ended on the 43rd lap while running 12th. Another quick caution appeared for Bart Hartman on the 47th lap and then on lap 63 when Rick Aukland spun in turn four as Clanton was trying to make his way past.

Clanton avoided a brief scare with the slower car of Audie Swartz on the 73rd lap and maintained control, but Carrier took second from Chamberlain with 21 laps remaining and quickly reeled in Clanton. Carrier dove underneath the leader on lap 82 and made a serious bid for the lead before Clanton edged back ahead.

Carrier's switch to the high groove in the final laps was fruitless, too, as Clanton held on to increase his earnings over the last seven days to more than $40,000.

Notes: Clanton's Ronnie Dobbins-owned Rocket Chassis has a Custom Race Engine and sponsorship from Stevens Plumbing and Mechanical and Allstar Performance. ... Both front-row starters passed on the race's Front Row Challenge that would've paid a $40,000 bonus to win from the tail if Brandon Kinzer or Rob Blair had elected to start there. ... The race wrapped up the season for both the O'Reilly All Stars and K-C Raceway.