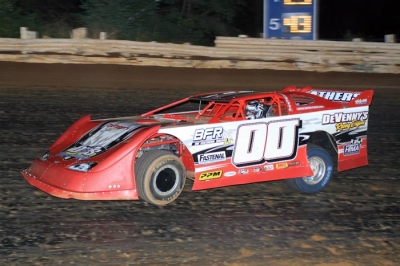 Feathers, who picked up $5,000 the previous weekend at Eastside Speedway in Waynesboro, Va., doubled that to $10,000 at Winchester in winning the track's signature event for the second time. His previous victory came in 2001.

The polesitter Feathers took the lead from outside front-row starter and 2009 track champion Tommy Armel of Winchester for good on the 16th lap and led the rest of the 100-lapper that was delayed a day by rain. Fast qualifier Gary Stuhler of Greencastle, Pa., a nine-time Winchester 200 winner who lowered the track record in Friday's time trials, settled for second.

Third-starting Rick Eckert of York, Pa., finished in the same spot while seventh-starting Jason Covert of York Haven, Pa., and fifth-starting Josh Richards of Shinnston, W.Va., rounded out the top five at the 3/8-mile oval.

At the outset, Armel took the lead on the high side with Feathers in the low groove. Feathers slipped ahead on the sixth lap, but Armel went back ahead on lap 13. Feathers finally won the duel for good on the 16th lap as Armel soon had his hands full with second-row starters Stuhler and Eckert.

By the time J.T. Spence slowed for a lap-40 caution, Stuhler and Eckert had dispatched of the fading Armel and began chasing Feathers, who held the top spot at the midway fuel break. Armel was all the way back to 11th and dropped out thereafter with a 15th-place finish.

Feathers led lap 51 with Stuhler, Eckert, Richards and Covert giving chase during a lengthy green-flag run as the leader pulled away over a 32-lap stretch.

A final caution on lap 82 when Rusty Sites of Chambersburg, Pa., slammed the turn-one wall bunched the field, but Stuhler couldn't keep up with Feathers over the race's late stages.

Notes: Feathers drives a MasterSbilt Race Car with a DeVenney's Racing Engine and sponsorship from Long Excavating, Fastenal and Hoosier Tire Mid-Atlantic. ... The race's most serious wreck happened at the outset when Brian Booze spun and collected Gerald Davis with Frankie Plessinger, Brad Omps, Andy Anderson and Denny Bonebrake also catching part of the turn-three incident. A red flag was required for the cleanup. ... Walker Arthur's race ended when he got into an infield tire barrier in the early stages ... A dozen of 25 starters were running at the finish. ... Among drivers failing to make the feature: Larry Ramsey, Ronnie DeHaven Jr., Greg Roberson, Kristian Looney, Kris Eaton, C.S. Fitzgerald, Jonathan DeHaven, Walter Crouch, Scott Cross, Greg Elrod and Jared Almarode. ... Winchester takes a week off before wrapping up the season Oct. 9-10 with the Virginia State Nationals with Limited Late Models as the top class.