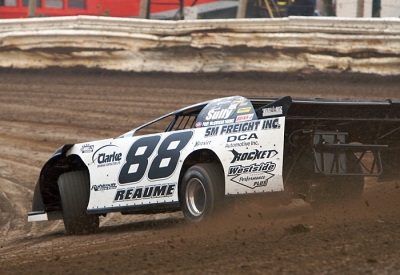 SOUTH BUXTON, Ontario (Sept. 26) — Andrew Reaume breathed two huge sighs of relief on Saturday night. First, the Blenheim native received word from the hospital that his father Brett was OK after a horrific crash in the hot laps earlier in the evening. Second, he finally won the Castrol UMP Late Model Shootout. | Slideshow

“It feels real good to finally win it. ... but it’s a bittersweet thing, I wish it was under different circumstances,” Reaume said at his hauler, about an hour after pulling off his Shootout victory and just minutes after the latest update from family members at the hospital.

Andrew was following his father on the straightaway during the early stages of their hot lap session when Brett’s No. 77 car went flying off the end of the track, flipped violently several times and crashed through the chain-link perimeter fence behind turn four.

Andrew quickly got out of his No. 88 machine and was one of the first to the scene.

“You don’t really know what you’re feeling, I was kind of in shock,” Andrew recalled as he got to his father’s car.

Andrew said his father was knocked out briefly but quickly regained consciousness.

Brett was trapped upside down as South Buxton’s emergency crew had to cut the car to get injured driver out of the mangled mess.

He was transported by ambulance to Chatham-Kent Public General Hospital where he will remain under observation until Monday.

Andrew said on Sunday that his father suffered some cracked ribs, broken nose and thumb and some head and facial injuries but has cleared all tests.

He admitted it was tough to get back into his own car for the heat race, about half-an-hour after racing resumed.

“There’s nothing that can get that out of your head,” Andrew said.

“I wasn’t worried about myself being out there at all. ... it’s just that’s pretty hard to stop thinking about. “You have to focus on what you’re doing. When we were going green I was OK, but under every caution, that’s all I was thinking about.”

He finished second to Ridgetown’s Dale Glassford in the third heat race and drew the fourth starting position for the 35-lap feature.

Justin Robinson, of Shepherd, Mich., won the battle of front-row starters, getting by Glassford on the straightaway to take the early lead.

Reaume moved into third place on lap four and brought the defending Shootout winner, Chris Ross of Wallaceburg, in tow.

However, Ross’s bid for a second straight Shootout victory ended a couple of laps later when his No. 18R suffered a broken upper control arm and ball joint after contact with another car. He finished, coincidently, 18th.

Reaume, meanwhile, moved into second and quickly chased down Robinson.

He took the lead on lap 12 and led the final 23 circuits.

“He was running the top and he didn’t have much room for forgiveness the way he was going in the corners,” Reaume said of his pursuit of Robinson.

“I put a little pressure on him, he pushed just a little bit and had to get out of it,” he described the pass for the lead coming out of turn four. Once in front, Reaume was unchallenged.

The final 12 laps were run under green, which didn’t help runner-up Brian Ruhlman, of Clarklake, Mich., who helps Reaume set up his car.

“I needed a caution,” Ruhlman said. “Even if we had about a 20-lap run, we probably still would have had that same gap.

“But if we had a caution, I might have tried to intimidate him a little bit to see if he’d make a mistake,” Ruhlman added with a laugh.

“He’s earned it,” Ruhlman said of his protege's victory. “He should have won this a lot of times but didn’t.”

Reaume didn’t realize who was in second over the final laps.

“I didn’t worry about who was behind me, I just concentrated on hitting my marks and trying to see through the fog. ... and it all worked out,” he said.

A heavy fog descended on the track midway through the Late Model feature, but it was only a factor under caution.

“The fog was OK after we got another lap in. That’s why I tried to keep up a good pace under the caution, to get it to lift,” said Reaume, who earned $4,500, including a $500 bonus from Dig 'R Wright Excavating as the top finishing Canadian.

Chatham’s Brad Authier was the second highest local finisher in eighth, followed by Glassford, who rebounded from a flat tire to work his way back into the top 10.

For Reaume, the Shootout win is the biggest of his stellar career.

“It’s definitely the biggest money win ever,” he said. “Yes, I’d say it’s the biggest ever. The only one that would top this would be one at Eldora. But it was good to get the monkey off my back.”

He just wishes his father could have been there in victory lane, but he’ll have a big trophy and huge pay check waiting to show Brett when he gets home.

Notes: Reaume's Malcuit-powered Rocket Chassis is sponsored by SM Freight and Clark Drainage Contractors. ... A bonus from Dig ‘R Wright Excavating to the top Canadian finisher added $500 to Reaume's earnings. ... Late Model runner-up Brian Ruhlman won the modified event, earning $2,500. The feature was called after 15 of the scheduled 30 laps because of dense fog that made for unsafe racing conditions. ... The track's four-cylinder division feature was also cancelled.