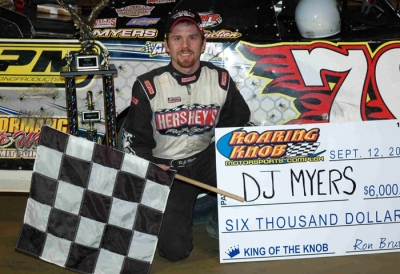 MARKLEYSBURG, Pa. (Sept. 12) — D.J. Myers of Greencastle, Pa., won a duel with Jason Covert of York, Haven, Pa., and went on to win the 12th annual King of the Knob at Roaring Knob Motorsports Complex. The third-starting Myers earned $6,000 for the 51-lap victory in the Unified Force Racing Championship event. | Slideshow

Dave Hess Jr. of Waterford, Pa., rallied from 13th to finish second ahead of Covert while 11th-starting Sam Stile of Charleroi, Pa., and Rob Blair of Titusville, Pa., rounded out the top five. Polesitter Jim Kutas of Elizabeth, Pa., slowed and pulled out of the race on the 48th lap and series points leader Alex Ferree of Saxonburg, Pa., was eighth.

Myers shot into the lead at the outset, but Covert ran side-by-side with Myers after a lap-six restart and cleared Myers before another yellow appeared on the 11th lap. Myers nosed back ahead to lead laps 12 and 13, but Covert went back ahead and led comfortably before Corey Conley slowed for a lap-30 yellow.

With Covert’s lead gone, the next side-by-side restart saw Myers edge back ahead, and Covert fell to third behind Stile with Blair and Hess giving chase. Covert regained second from Stile on the 34th lap, but Myers had built a half-straightaway lead. A guaranteed victory for Myers was still in doubt when Kutas slowed with three laps remaining, and a multicar tangle on the next lap set up a two-lap shootout.

Myers held on for the victory while Hess continued his rally, moving up to second in the final laps.