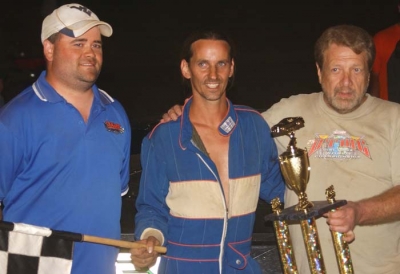 MIDDLEBOURNE, W.Va. (Sept. 5) — Freddie Carpenter has driven used equipment throughout his career, so when he bought a new Late Model last season, he didn't want to race it until he could afford to put all-new components on it. The wait for the car's debut was well worth it. | Slideshow

The first new car the Parkersburg, W.Va., driver has ever piloted carried him to victory in the unsanctioned Hillbilly 50 at Tyler County Speedway, giving him $4,000 and a guaranteed starting spot in Sunday's $41,000 Hillbilly 100 on the Lucas Oil Late Model Dirt Series.

“I’ve been trying to win this race for a long time,” Carpenter said of the event for steel-block engine Late Models. “I finished third last year, and I think third the year before that, and both times I started near the back of the field or came from the back during the race. Tonight we started up front and I was determined we were gonna make it happen the other way.”

Carpenter started outside the front row and took command early with Tyler Carpenter running second. Rallying from the eight row, Zack Dohm of Cross Lanes, W.Va., used the low groove to make his way to the front, eventually taking the second spot from Tyler Carpenter.

Dohm caught the leading Freddy Carpenter amid traffic and the frontrunners ran side by side with Dohm down low and Carpenter on the high side. Dohm finally squirted underneath Carpenter, but a three-car accident in turn one brought out the last of three cautions in the final laps.

On the restart, Carpenter went back to the high groove and wrestled the lead away from Dohm, racing to a victory that triggered a raucous victory lane celebration with dozens of well-wishers. After standing on his car's roof, Carpenter took a swan dive into the crowd that celebrated with him for 10 minutes in victory lane.