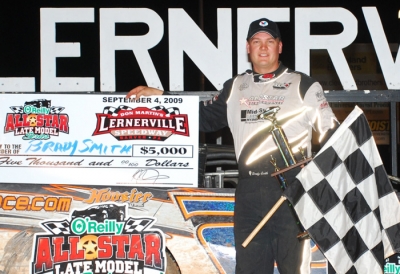 SARVER, Pa. (Sept. 4) — Brady Smith of Solon Springs, Wis., made the most of a Friday off from the World of Outlaws Late Model Series with a victory at Lernerville Speedway. Smith earned $5,000 for an O'Reilly All Star-sanctioned victory in the Late Model portion of the Dual in the Dirt, his first win of 2009 on any series. | Slideshow

Smith officially led every lap, but the sixth-starting Satterlee got ahead of him on the backstretch on the 42nd lap to briefly go ahead. Smith edged aback ahead at the start-finish line and built a cushion of a few lapped cars, holding on the rest of the way.

“We had to work for that one,” a relieved Smith said in victory lane. "We drew the pole and it’s always nice to start there, but it doesn’t mean anything at a place like this where you can start in the back and make your way to the front. I saw Chub (Frank) a few times and I knew he was a little different on tires than we were. I actually had to slow down a little bit to maintain the lead.”

Notes: Smith's Bloomquist Race Car has a Vic Hill Racing Engine and sponsorship from Big Red Motorsports, Mid-America Equipment Inc. Hydraulics and Willow River Saloon. ... Smith and other WoO regulars were in between races in Brewerton, N.Y., and Franklin, Pa. ... Denton Boyer of Punxsutawney, Pa., started outside the front row but ended up 18th. ... Jason Covert and Jeremy Miller tangled on the backstrech on the first lap, and Miller ended up spinning and collecting Bump Hedman. ... Coleby Frye spun early in the second turn. ... Alex Ferree of Saxonburg, Pa., who wrapped up his third straight Late Model championship at Lernerville a week earlier, was 11th in the feature. ... Randy Hannagan won the accompanying All Star Circuit of Champions sprint car feature. ... The O'Reilly All Star Late Models have two more races in 2009, both at K-C Raceway, first on Sept. 19 and then on Oct. 1-3 for the $20,000-to-win Dirt Track World Cup.