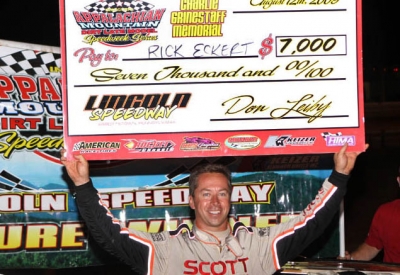 ABBOTTSTOWN, Pa. (Aug. 12) — Lincoln Speedway is Rick Eckert’s house. And he proved it again Wednesday night, even with throttle problems. Rick Eckert of York, Pa., helped the Grinestaff family celebrate the race’s namesake by leading all 40-laps of the second annual Chargin’ Charlie Grinestaff Memorial on Wednesday to earn $7,000. | Slideshow

"I love coming here and watching my nephew (Cody Darrah) run sprint cars," said Eckert after pulling the Raye Vest Racing No. 24 into victory lane, "I don’t know what happened, but during that first caution, I don’t know if something broke in the throttle linkage in the secondary got stickin’. They were wanting me to slow down during those caution flags, but I was burning the brakes out trying to slow down!"

The Grinestaff Memorial was originally scheduled as race five of seven of the inaugural Appalachian Mountain Dirt Late Model Speedweek series on June 10, but was postponed due to rain after all the heats and one consolation were in the book. And with only three cars on hand for the continuation of the second consolation, the consolation was not needed and all that remained was the big 40-lap feature.

In the main event, Eckert drove from his outside front row starting position into the lead over polesitter Jeff Rine of Danville, Pa., at the drop of the green. Fourth-starting Jason Covert of York Haven, Pa.k, got around Rine for second before the first lap was complete, with third-starting D.J. Myers of Greencastle, Pa., and sixth-starting Booper Bare of Rockbridge Baths, Va., running fourth and fifth respectively by the end of the opening lap.

Eckert opened up a slim lead as he was about to enter lapped traffic on the seventh lap when the caution waved for Steve Francis of Ashland, Ky., who stopped on the frontstretch. Eckert continued to lead Covert and Rine through a series of cautions on lap nine for a slowing Scott Haus of Hamburg, Pa., and on lap 15 for Myers, who slowed running fourth.

Eckert entered lapped traffic on lap 23 as he continued to lead Covert by 1.79-seconds, with Rine still in third. Seventh-starting Josh Richards of Shinnston, W.Va., began pressuring Rine for third on the 20th lap and on the 23rd lap Richardsmade the pass to enter the top-three.

The race’s final caution with 15 laps to go for a stopped Jason Miller allowed Covert and Richards one last chance to catch Eckert. But Eckert got a good restart and gradually began to pull away as the laps wound down. He took the checkered 1.32-seconds ahead of Covert for the $7,000 win, $2,000 of which was added by the Grinestaff family. Richards, who won the APM points championships in June, settled for third, with Rine fourth and Bare fifth.