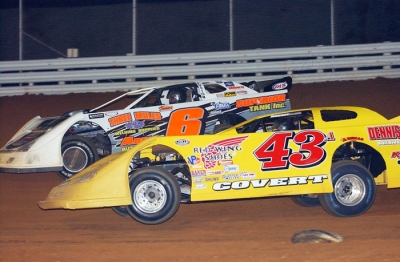 "He was better on restarts for a couple laps, but we were better on the longer runs," said Lathroum, who won his fourth special event of 2009. "The more I ran, the better rhythm I got and that helped me to miss the rough spots. You've gotta concentrate to hit 'em just right, and I was able to do that once we got a bunch of laps in a row."

Polesittery Coleby Frye of Dover, Pa., led the field to green, but fellow front row-starter Jeremy Miller of Gettysburg, Pa., went out front early. But Miller lasted just six laps, handing the point to Lathroum for a lap-seven restart. By then, the 10th-starting Covert was already up to fourth.

Several cautions hampered the first half of the race — 10 yellows among the first 26 laps among 11 cautions in all — and Covert was a force on restart, nearly slipping underneath Lathroum especially between laps 23-26.

But a dozen laps of green-flag racing starting on lap 26 allowed Lathroum to get a little breathing room, and he held on for the victory.

Notes: Lathroum's MasterSbilt Race Cars has an Eatmon Racing Engines and sponsorship from Three Mules Welding Supply, Superior Tank, Lathroum's Seafood and Integra Shocks. ... Lathroum's wife Sharon and son Austin joined him for victory lane photos. ... The race is the second of three series races on a shortened MACS season. ... The final scheduled event is set for Saturday at Virginia Motor Speedway in Saluda, Va., for the $12,000-to-win USA 100.