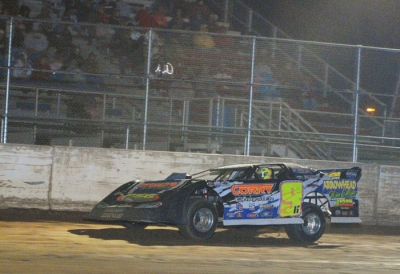 Front-row starters Chad Valone of Warren, Pa., and Gregg Satterlee of Rochester Mills., Pa., ran up front virtually the entire race with Valone leading every lap except the 12th, when Satterlee briefly slipped ahead. Valone was in control at the white flag but when Satterlee tried to get under him, the leaders made contact in turn two with Valone spinning. Satterlee was charged with aggressive driving and sent to the tail along with Valone, but both drivers elected to park.

Knight restarted up front and raced to the checkered flag ahead of Hess.

Notes: Knight's Rocket Chassis has a Craiger engine and sponsorship from Arrowhead Wine Cellars, Corry Chrysler, Jay's Auto Wrecking and NYPenn Surveying. ... Knight's victory guarantees him a feature starting spot in the ULMS season finale at McKean County. ... In the second consolation race, Brady Wonderling wildly flipped down the backstretch after contact with two other cars. The Rocket Chassis recently purchased from Tim McCreadie's team was destroyed in the series of rolls but Wonderling wasn't injured. ... Jason Dupont earned hard charger honors in the feature with his 22nd-to-ninth run. ... Bob Close was knocked out of the fourth spot with a flat tire on the eighth lap. ... Jeremy Ohl drew a caution with a lap-18 spin. ... David Scott of Garland, Pa., won the Fastrak feature for Crate Late Models. ... The Aug. 14 ULMS event at Arcade International Raceway in Delevan, N.Y., has been cancelled. ... Next up for the series is a $3,000-to-win event on Sunday at Tri-City Speedway in Franklin, Pa.