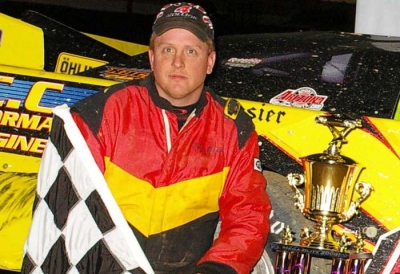 MARKLEYSBURG, Pa. (Aug. 1) — Taking the lead following a lap-28 restart, John Mollick of Toronto, Ohio, moved into the points lead on the Unified Force Race Championship Series at Roaring Knob Motorsports Complex. The fourth-starting Mollick earned $3,000 in the 41-lap victory spiced by the disqualification of two front-running drivers after an accident on a double-wide restart.

Outside front-row starter Gary Dalton of Morgantown, W.Va., finished second while consolation race winner Andy Anderson of Martinsburg, W.Va., rallied from 22nd to finish third. Gregg Satterlee of Rochester Mills, Pa., who led the 28th lap after the controversial restart, was fourth and sixth-starting Steve Everhart of Hollidaysburg, Pa., rounded out the top five in the third UFO event of the season.

Polesitter Keith Jackson of Odenton, Md., and fifth-starting Butch McGill of West Union, W.Va., were disqualified after a lap-28 restart. Jackson had led the first 27 laps, drag-raced with McGill for the lead on the restart when the cars got together, sending McGill spinning and triggering a frontstretch melee. Jackson and McGill were disqualified for their behavior during the caution period.

Chuck Harper of Beverly, W.Va., who started 10th, took third from Satterlee on the 21st lap but retired two laps later as smoke signaled problems with his No. 00H.

John Flinner of Zelienople, Pa., was running third on the 28th lap when he got into the turn-four wall to set up the restart that ended Jackson's run up front.