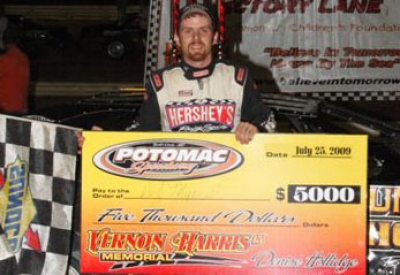 Bare's scored his milestone 50th victory at the 3/8-mile oval, and fourth of the season, to earn $3,000 in Friday's night's event, while Myers earned $5,000 on Saturday in the 51-lap Vernon Harris Memorial.

Both victories came under similar circumstances and at the expense of Jamie Lathroum of Mechanicsville, Md., who broke an axle leading the late stages both events. Friday's misfortune came with seven laps remaining while Saturday's came with three laps remaining.

In Friday's feature, Bare led the first six laps until Lathroum took command. He appeared to be headed to victory lane until the broken axle sent him into the backstretch wall on the 28th lap. Bare inherited the lead and led the rest of the 35-lapper.

“I feel bad for Jamie," Bare said. “I think he had the car to beat, but Jamie is a lot of fun to race with and we rubbed doors a little during the race and that’s always fun, but we’ve lost races the same way.”

In Saturday's finale, Lathroum started outside the front row and blasted into the lead before facing challenges from Kyle Lear of Severn, Md., who fell from contention with a lap-17 spin. The third-starting Myers took up the chase and was reeling Lathroum in late when disaster stuck once again, sending Lathroum into the backstretch wall. Myers led the final three laps for his second Potomac victory of the season.

“(Lathroum) had the car of the weekend as far as I’m concerned," Myers said. "He’s fun to race with and I’m real sorry about his bad luck, but I’ve always said it’s better to be lucky than good.”

Myers was quick to praise his car owner, too. “I can't thank Greg Gunter and PPM chassis enough," the winner said. "We work real hard at this deal and the results are starting to show.”

Jim Yoder of Selinsgrove, Pa., snared second at the checkered with Bare in third. Austin Hubbard of Seaford, Del., was fourth and Dickson completed the top five.

Two events remain for the Three State Flyers. Thunder Valley Raceway in Central City, Pa., hosts the tour Aug. 8 and Bedford (Pa.) Speedway hosts a Sept. 7 event, which will also including a $2,000-to-win feature among the top 20 money winners on the series.