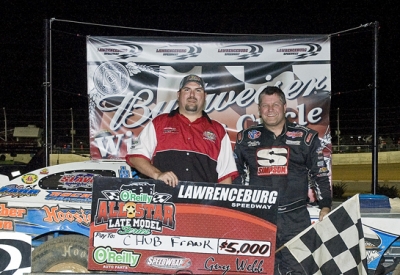 LAWRENCEBURG, Ind. (July 18) — Snapping one of the longest losing streaks of his career, Chub Frank of Bear Lake, Pa., led all 30 laps of the O'Reilly All Star Series event at Lawrenceburg Speedway for his first victory of 2009. The World of Outlaws Late Model Series regular earned $5,000 at the third-mile oval in southeastern Indiana.

“I’ll tell you what, we really needed this one,” said Frank, who fought off several challenges from Darrell Lanigan of Union, Ky., for the victory.

Lanigan settled for second ahead of Jared Hawkins of Fairmont, W.Va., with 22nd-starting Duane Chamberlain of Richmond, Ind., rallying to finish fourth. Polesitter Coleby Frye of Dover, Pa., rounded out the top five at the track that will host its first Dirt Track World Championship in October.

Frye and Frank started on the front row with Frank jumped to the high groove at the outset to take the lead with Lanigan immediately went to second. Hawkins and Tim Dohm made contact on an early restart while battling fifth, and both dropped back a few spots. Later, hometown drivers Scott James and Jason Jameson got together in turn two, knocking James out of contention.

Lanigan repeatedly looked underneath Frank, but Frank held the point with Jameson and Frye in pursuit. Hawkins clawed his way back into the top five and took fourth from Frye before a caution for a spin by Eric Wells on the frontstretch.

With the top two of Frank and Lanigan edging away from the field, Chamberlain continued his charge up front, taking fifth from Jameson on the 24th lap. A final caution appeared on the 27th lap when Rod Conley lost a driveshaft, but Lanigan couldn't do anything with Frank in the three-lap shootout to the finish.

Notes: Frank's Rocket Chassis has a Custom Racing Engine and sponsorship from Corry Rubber, Corry Laser Technology, Lake Shore Paving and Nystrom's Auto Sales. ... Fast qualifier Matt Miller was involved in a heat-race skirmish that damaged his No. 7. ... Rob Blair finished seventh to cut into the series points lead of Boom Briggs, who was 12th. ... With three previously scheduled events cancelled, the O'Reilly All Stars take a lengthy break until its next scheduled event Sept. 4 at Lernerville Speedway in Sarver, Pa.