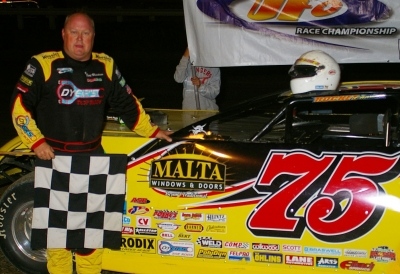 IMPERIAL, Pa. (July 18) — Fifth-starting Bart Hartman of Zanesville, Ohio, took the lead from outside front-row starter Tommy Beck of Murrysville, Pa., on the third lap and never looked back in winning the Red Miley 53 at Pittsburgh's Pennsylvania Motor Speedway. Hartman earned $5,300 in purse money and extra $2,703 in lap money for a $8,003 payday for his first career Unified Race Force Championship victory.

Polesitter John Flinner of Zelienopole, Pa., the winner of the season's first UFO event, was an early dropout and 11th-starting Steve Baker of Morgantown, W.Va., the only driver who could keep pace with Hartman, broke a driveshaft and fell out with 17 laps remaining. Beck finished seventh.

Several cautions slowed the action, including three separate yellows on the 14th lap, including a delay for track maintenance where low-running drivers were kicking loose dirt and rocks onto the racing surface. But after a scheduled lap-26 fuel stop, the lone caution in the second half of the race was for Baker's departure.

Hartman's winnings in the race that honored late track promoter Red Miley included $53 for each lap led, totaling more than $2,700.

Notes: Hartman's Cornett-powered Rocket Chassis is sponsored by Allstar Performance, Lucas Oil, Malta Doors and Windows and Urgent Cash. ... When the race was stopped on the 14th lap to work on the track, workers added water on the extreme inside groove to keep drivers from running too low. ... The series has moved the July 25 race at Tyler County Speedway in Middlebourne, W.Va., to Aug. 2, giving UFO drivers an Aug. 1-2 weekend at Roaring Knob Motorsports Complex in Markleysburg, Pa., and Tyler County.