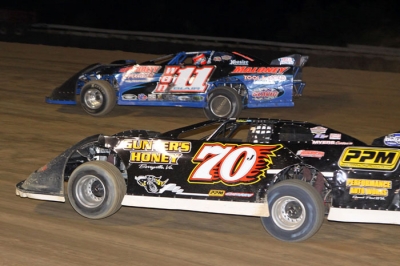 CLEARFIELD, Pa. (July 3) — D.J. Myers of Greencastle, Pa., overtook Rob Blair of Titusville, Pa., on the 19th lap at Central Pennsylvania Speedway and led the rest of the way in the 34th annual Yankee Doodle 50 for his first-ever victory on the O'Reilly All Star Series. The 12th-starting Myers earned $10,000 for one of the richest paydays of his career. | Slideshow

Blair settled for second with Gregg Satterlee of Rochester Mill., Pa., in third. O'Reilly All Star points leader Boom Briggs of Bear Lake, Pa., rallied from a lap-31 flat tire to finish fourth with Devin Friese of Chambersburg, Pa., finished fifth in a race where just nine of 24 starters were running at the finish.

Blair maintained control through the early stages as Myers made his way forward from his sixth-row starting spot. Cautions on lap seven and eight for Ron Davies and top-five running Keith Barbara continued to slow the action early.

After more cautions, mostly for flat tires, Myers took second from Satterlee and set his sights on Blair. Myers made the winning move on the 19th lap and began to stretch his lead before the lap-31 caution for Briggs.

A final caution on lap 49 for Jeremy Miller's flat set up a two-lap dash to the checkers, and Myers was able to keep Blair at bay in racing to the victory.

Notes: Myers drives a PPM Chassis with a Hershey Racing Engine sponsored by Gunter’s Honey. ... Coleby Frye lowered the track record with his 15.447-second lap in time trials. ... Tim McCreadie's team had to scramble to swap powerplants following his heat race victory. ... Jared Miley of South Park, Pa., finished 10th after borrowing Benny Gordon's car. ... Next up for O'Reilly All Star competitors is a July 17-18 weekend in Indiana with a Friday night event at Twin Cities Speedway in North Vernon and a Saturday night event at Lawrenceburg Speedway. Both pay $5,000 to the winner.