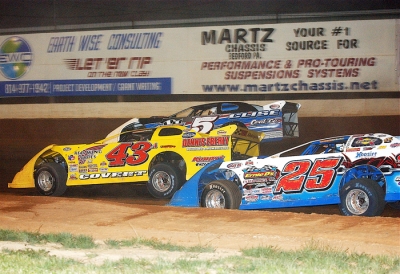 BEDFORD, Pa. (June 12) — Taking the lead in the final laps, Josh Richards won the Appalachian Mountain Speedweek finale at Bedford Speedway, a victory that narrowly lifted the 21-year-old Shinnston, W.Va., to the points title on the first-year miniseries. Richards, driving the Ernie Davis-owned No. 25, earned $5,000 for the race victory and $2,000 slated for the Speedweek champion.

Richards won a tense duel over Jason Covert of York Haven, Pa., and Rick Eckert of York, Pa., in the closing laps at the 5/8-mile oval, with Eckert getting the second spot and Covert, who lost a cylinder near the race's midpoint, finishing a disappointing third after leading late in the race. Polesitter D.J. Myers of Greencastle, Pa., and fast qualifier Austin Hubbard of Seaford, Del., rounded out the top five. Jeremy Miller of Gettysburg, Pa., who entered the racing leading the Speedweek points, finished seventh and fell a single point shy of Richards for the inaugural crown.

Myers led the first two laps before Richards took command, but Covert didn't let Richard get too far away to take the point in the first half of the 40-lapper. They swapped the lead amid lapped traffic and Covert was out front when his Barry Klinedinst-owned No. 43a began smoking with developing engine woes.

Richards closed back in the race's late stages and made his winning move before the white flag. Eckert took advantage to wrestle the second spot from Covert on the backstretch on the final lap.

Notes: The winning car is a Rocket Chassis has a Cornett engine and sponsorship from Ernie D's Enterprises and Ernie's Towing & Hauling. ... Richards missed the miniseries opener at Hagerstown (Md.) Speedway but still won the title with 637 points to edge Jeremy Miller (636), the winner at Selinsgrove (Pa.) Speedway. ... The Speedweek was scheduled for seven races but Thursday's Port Royal (Pa.) Speedway event was rained out and mid-race rain postponed the Lincoln (Pa.) Speedway event to Aug. 12 (as a non-points event). ... The Speedweek drew 107 drivers overall and car counts of no less than 40 at each event.