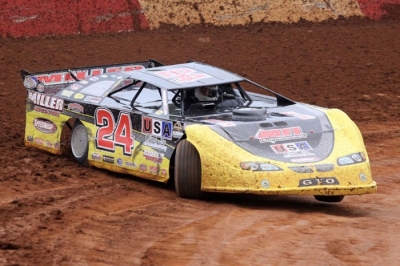 ABBOTTSTOWN, Pa. (June 10) — Lincoln Speedway gave it the old college try on Wednesday night on the fifth leg of the Appalachian Mountain Speedweek. But persistent rain which began at 9:20 p.m., forced postponement of the remainder of the event until Wednesday, Aug. 12. | Slideshow

The second annual Charlie Grinestaff Memorial, scheduled to pay $7,000 to the winner, drew 47 Super Late Models, but rain that hit during the evening's consolation races spoiled the event.

Because the show will not be completed before the end of the Speedweek series, points will not be awarded for time trials or qualifying.

The Aug. 12 makeup will begin with conclusion of the second consolation event, at which two more qualifiers will be determined. That will set the field for the 40-lap feature. Rain checks will be honored; admission for those attending Aug. 12 without a rain check will be $10.

Setting a new one-lap track record in time trials over the 47-car field was Speedweek points leader Jeremy Miller of Gettysburg, Pa., with a 15.540-second lap, breaking the old mark of 16.274 seconds set by Rick Eckert on Aug. 13, 2005.