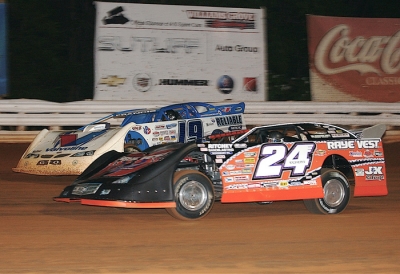 MECHANICSBURG, Pa. (June 9) — Steve Francis of Ashland, Ky., got in on the Appalachian Mountain Speedweek fun at Williams Grove Speedway with a $5,000 victory Tuesday night on the fourth leg of the seven-race miniseries. | Slideshow

Driving for Maryland-based Beitler Motorsports, Francis started third and overtook outside front-row starter Rick Eckert of York, Pa., in the early laps for a lead he'd never give up. Francis kept his No. 19 in the high groove throughout the race, planting his right rear tire against the cushion and setting sail.

Briefly challenged on restarts, Francis edged away as the final 22 of 40 laps were run without a caution. Eckert ended up five lengths behind Francis at the checkered flag with eighth-starting Josh Richards of Shinnston, W.Va., finishing third in his debut at the sprint-car stronghold. D.J. Myers of Greencastle, Pa., who battled with Eckert for second earlier in the race, was fourth while Darryl Hills of Great Mills, Md., rounded out the top five. The event was slowed by six cautions in the first half of the race, three on the 18th lap.