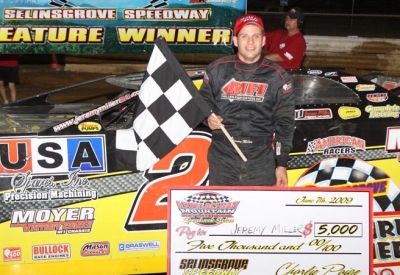 Rine, a six-time winner this season at Selinsgrove's half-mile oval, settled for second in the second of seven events on the inaugural Speedweek, which runs at five Pennsylvania tracks along with Hagerstown (Md.) Speedway and Winchester (Va.) Speedway.

Coleby Frye of Dover, Pa., finished third while 10th-starting Rob Blair of Titusville and Nick Dickson of Lewiston gave Pennsylvania drivers a sweep of the top five spots. D.J. Myers of Greencastle, Pa., was also in contention, challenging Rine for the lead, but contact with Frye flattened the right-rear tire of Myers and he ended up 18th in a feature plagued by nine caution flags.

Jason Covert of York Haven, Pa., who won the Speedweek opener at Hagerstown on Saturday, was sixth.

Notes: Miller's Victory Circle Chassis is powered by a Bullock Race Engine and sponsored by USA Spares, Miller Fabrication and Jones Racing Products. ... The event was sponsored by Jeff's Auto Body and Recycling Center. ... The victory was Miller's first of 2009 and first in the Victory Circle car out of Hall of Fame driver Billy Moyer's Batesville, Ark., shop. ... The event drew a solid 54 Super Late Models, following the opener at Hagerstown, which drew 65. ... Rick Eckert of York, Pa., was making his first appearance at Selinsgrove in more than 20 years. He outran D.J. Myers in a heat race but scratched from the feature because of engine failure. ... Josh Richards of Shinnston, W.Va., who was piloting the Ernie Davis-owned No. 25, wasn't a factor in finishing seventh. He spent part of the night under TV lights with an interview on Speed's "Wind Tunnel with Dave Despain" program. ...