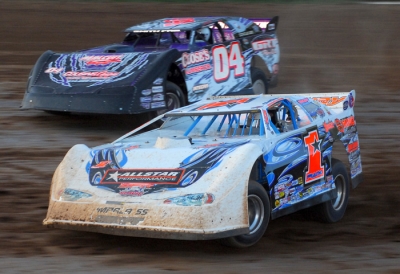 FRANKLIN, Pa. (May 31) — While driving former Chub Frank-owned cars that feature a similar decal scheme, Boom Briggs has been confused with the World of Outlaws Late Model Series regular plenty of times. You couldn't blame fans at Tri-City Speedway on Sunday, because the Bear Lake, Pa., driver actually was driving one of Frank's No. 1* machines.

Briggs, a former crew chief for Frank, put the car to good use by taking the lead from Rob Blair on the 17th lap at Tri-City Speedway and going on to a 30-lap victory worth $2,500. Briggs notched his third career victory on the Northern Tier United Late Model Series and his second of the weekend after an O'Reilly All Star Series triumph at Butler (Mich.) Speedway.

“We picked up a win last night in Michigan, but the car was sidelined with motor problems," Brigg said. "When we got back to the shop we swapped cars and borrowed this one from my cousin, Chub Frank. Since we were able to pick up a win, I am sure he won’t be upset with us

"We wanted to try some things for the All Star Late Model event here (June 14) and we certainly learned some valuable information tonight."

Veteran drivers Dick Barton of Ashville, N.Y., and Bob Close of Eldred, Pa., led the 21-car field to the green with Close immediately taking the lead. Close nine circuits until a spin by Jason DuPont slowed the action.

On the restart, Blair, of Titusville, Pa., grabbed the lead from Close in gunning for his second ULMS victory of the season at Tri-City, where he's a former champion. But Briggs closed the gap on the lead, making a move on lap 17 to get ahead. The frontrunners battled side-by-side, but Briggs edged ahead to score the victory. Blair settled for second followed by Jared Miley of South Park, Pa., Close and hometown driver Matt Lux.

Notes: Briggs normally drives a Rocket Chassis sponsored by Horton Equipment, Sorbera Family Chiropractic, CJ's Auto Transport, Briggs Transport and Sunset Dairy. ... Runner-up Rob Blair won the May 3 ULMS stop at Tri-City. ... Next up for ULMS competitors is a June 12 event at Raceway 7 in Conneaut, Ohio. The $2,000-to-win event is the first series stop at Raceway 7 since 2003.