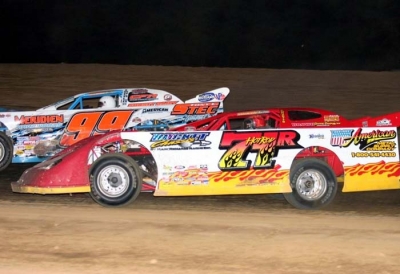 BUTLER, Mich. (May 30) — Series points leader Boom Briggs of Bear Lake, Pa., regained the lead from Rod Conley with 10 laps remaining at Butler Speedway to grab his series-leading third O'Reilly All Star triumph of the year. Briggs, who started on the pole and led 28 laps before giving up the lead to Conley, earned $5,000 and denied Conley a weekend sweep of a Michigan doubleheader. | Slideshow

"I needed this one bad,” said Briggs, who used the high groove to get back out front. "I was riding around on the bottom there and seen (Mike) Knight show me his nose on the outside, so I thought I’d go up there to see if I could find traction. I struggled to get into a solid rhythm after Conley got by me, but once we got on top, the car just kind of took off."

Briggs and Conley started out front in the 24-car field, but a first-lap pileup of seven drivers — A.J Burns, Corey Bevard, Rich Neiser, Mike Langdon, Jacob Rendel, Bryan Koebbe and Danny Knowles — halted the action quickly. Everyone was OK, and Briggs led the field back to green with Conley, of Wheelersburg Ohio, and Knight, of Ripley, N.Y., in pursuit.

As the laps ticked away, Jared Miley, South Park, Pa., and multitime Butler champion Terry Sroufe of Huntington, Ind., battled side-by-side for fourth, with Miley eventually slipping over the turn-two cushion to usher Rob Blair into the top five.

Up front, Briggs saw his 10-length lead began to dwindle amid traffic and Conley pulled up on his read deck. When Briggs slid slightly up the banking, Conley pounced with a low-groove move and took command on the 29th lap at the 3/8-mile oval.

Eric Swan spun in turn three for the race's final caution, and Conley took off again in looking for a followup victory to Friday's win at Hartford (Mich.) Motor Speedway. But Briggs edged into the higher groove by the 37th lap and his car reacted with quicker laps. He went back out front on the 40th lap, and Knight dropped Conley to third a lap later.

Briggs kept Knight at bay the rest of the way for the victory with Knight, Conley, Sroufe and Blair rounding out the top five.

Notes: Briggs drives a Rocket Chassis sponsored by Horton Equipment, Sorbera Family Chiropractic, CJ's Auto Transport, Briggs Transport and Sunset Dairy. ... Eric Spangler of Lake City, Mich., was the top-finishing home-state driver in ninth. ... Next up for the series is a $5,000-to-win event at Tri-City Speedway in Franklin, Pa., on June 14.