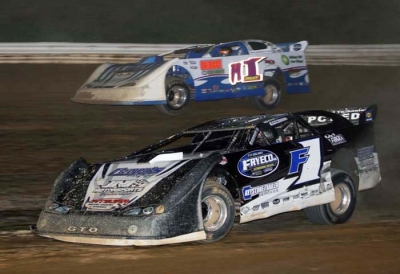 CLEARFIELD, Pa. (May 24) — Rallying from his 15th starting spot, Jared Miley of South Park, Pa., outdueled Coleby Frye of Dover, Pa., at Central Pennsylvania Speedway to capture Sunday's O'Reilly All Star Series event. The 23-year-old Miley earned $7,000 in a race with lead-swapping duels most of the 50-lap distance. | Slideshow

Frye, who led most of the way, settled for second with 20th-starting Mike Knight of Ripley, N.Y., rallying to finish third ahead of Jeremy Miller of Gettysburg, Pa., and Gregg Satterlee of Rochester Mills, Pa.

Tim Smith Jr. of McVeytown, Pa., and Dave Hess Jr. of Waterford, Pa., started on the front row with Smith pulled away before a lap-seven caution. Frye moved into contention on the restart, taking over on the 10th lap before he faced pressure from Dan Stone of Thompson, Pa., Stone took the lead on the 20th lap only to see Miley burst into contention to briefly lead on lap 24.

Frye overtook Stone and Miley to get back ahead and began a side-by-side duel with Stone. The next challenger was Miller, who took second from Stone on the 31st lap and brought Miley along for the ride. Frye maintained control as he dealt with lapped traffic before the final yellow appeared on lap 44.

Frye led Miley, Miller and Knight back to the green flag, and the high-running Miley made his winning move with four laps remaining to win the race to the checkered flag.