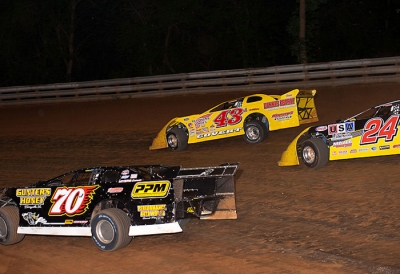 Jason Covert (43a) battles up front in his Hagerstown victory. (wrtspeedwerx.com)

“When I was a kid, I came and rooted for Denny Bonebrake and the Bonebrake Alignment car,” Covert said. “It’s a special meaning to me. That guy is one of the greatest late model drivers that ever sat in one. I still think he can do it as good as anybody. Those ones are the ones that started this division and got it built. I’m just lucky enough to drive in it.”

Although he was quick early on, he still wasn’t satisfied with the car following the advance he made in the dash from the last row.

“We ran the dash and tried something, but I knew it wouldn’t be good enough to get by those guys in the beginning of the feature, so I came in and asked them to change something and we got done just as they were lining up," Covert said. "It worked. ... it got me to the lip first and that’s where you had to be.”

Following his dash victory, Wampler sped from the pole to lead the feature as Covert quickly took second over Miller, who started outside the front row. Covert stayed on Wampler’s bumper during the opening laps while D.J. Myers of Greencastle, Pa., was challenging Miller for third and 10th-starting Tommy Armel had advanced five spots by lap five.

After Covert got under Wampler exiting turn four to take over on lap seven, Wampler handed the second spot to Miller when he got high in turn four, and Wampler lost seven spots three laps later. Covert had a two-second lead when the final caution appeared at the halfway point.

Following the restart, Covert continued rounding the top and stretched his lead to two seconds while Miller kept the same pace. Armel cleared Myers for third but continued to trail by nearly four seconds as Covert took the checkered flag.