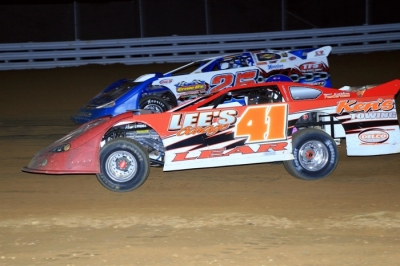 BUDDS CREEK, Md. (May 8) — Super Late Model rookie Kyle Lear of Odenton, Md., shocked the Stinger 50 field at Potomac Speedway for his first victory in the division. The 22-year-old made it a big one, earning $5,036 in a 50-lapper celebrating the track's 36th anniversary. | Slideshow

Lear's dazzling low-groove rally from the 13th starting spot culminated with a lap-38 pass of polesitter Josh Richards of Shinnston, W.Va., and Lear led the rest of the way.

“This is unbelievable," Lear said in victory lane after raising his arms triumphantly. "I wasn’t even sure the checkered flag was for me. ... Josh is a great racer and when we came off of turn four I gave him the outside lane and we raced hard into turn one and we were able to take the lead."

Jim Bernheisel of Lebanon, Pa., rallied late to finish second while Jason Covert of York Haven, Pa., was third. Richards, a World of Outlaws Late Model Series regular who fielded the Ernie Davis-owned No. 25, faded to fourth and Rick Eckert of York, Pa., rounded out the top five. Austin Hubbard of Seaford, Del., who started outside the front row, ended up seventh.