By Jason Shank and Clifford Dove 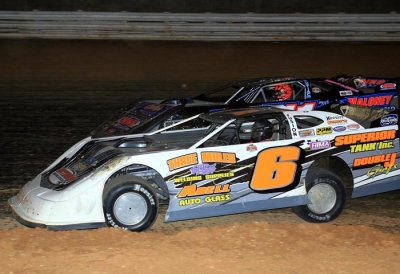 WINCHESTER, Va. (May 9) — Grabbing one of the biggest victories of his career, Jamie Lathroum of Mechanicsville, Md., outdueled Robbie Blair of Titusville, Pa., amid lapped traffic to lead the final 10 laps of the Lee Stultz Memorial at Winchester Speedway. Lathroum's 40-lap victory on the first-year O'Reilly All Star Series paid a career-high $5,000. | Slideshow

Jason Covert of York Haven, Pa., finished second at the 3/8-mile oval while Blair settled for third. Two drivers on a break from the World of Outlaws Late Model Series — Rick Eckert of York, Pa., and Josh Richards of Shinnston, W.Va. — rounded out the top five finishers in the third O'Reilly All Star event of the season. Points leader Boom Briggs of Bear Lake, Pa., winner of the first two series events, was 18th at Winchester.

Blair jumped into the lead over fellow front-row starter Gerald Davis of Delray, W.Va., at the outset, and Blair was in command when the event's only caution flew on the ninth lap for a turn-two tangle triggered by contact between Bo Feathers and Andy Anderson. Jared Hawkins, Coleby Frye, Jared Miley and Alan Sagi were also involved; only Feathers wasn't able to continue.

Lathroum was up to second for the restart, and he began to stalk Blair as the leader entered lapped traffic. Covert and Eckert were also in pursuit.

By the 25th lap, Lathroum was on Blair's rear deck, looking to make a move. He pulled alongside on lap 29 and the frontrunners ran door-to-door until Lathroum edged ahead. Blair stayed with him for a few laps before Lathroum began edging away. As Lathroum went on to the checkered flag, Covert nabbed the runner-up spot from Blair with three laps remaining.