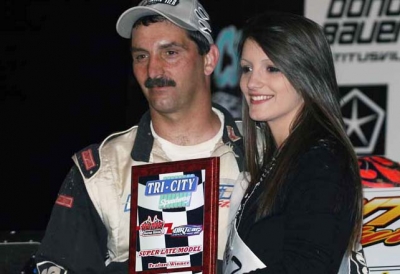 FRANKLIN, Pa. (May 3) — Returning to the track where he was the '97 champion, Rob Blair of Titusville, Pa., overtook Boom Briggs of Bear Lake, Pa., on the 22nd lap at Tri-City Speedway and held on for his fourth career victory on the Northern Tier United Late Model Series. Blair earned $2,000 for the 30-lap victory at the half-mile oval. | Slideshow

Front-row starters Ron Davies of Warren, Pa., and Briggs swapped the lead in the race's early moments with Davies eventually edging ahead of Briggs, Blair, Mike Close and Brent Rhebergen.

Although Briggs nosed ahead occasionally, Davies continued to officially lead at the scoring stripe through the 14th lap, when engine problems in his No. 71 spoiled his race. Briggs inherited the lead with Blair hot on his heels while eighth-starting Jared Miley of South Park, Pa., charged toward the front.

Blair made a slingshot pass of Briggs in turn two on the 22nd lap and pulled away by a few car lengths as Briggs and Miley gave chase. Briggs summoned a final charge when the white flag appeared, but Blair held on for the victory. Briggs and Miley were followed by seventh-starting Dave Hess Jr. of Waterford, Pa., and 17th-starting hometown driver Matt Lux in the caution-free affair.

Notes: Blair's Rocket Chassis is sponsored by Specialty Products, Bossard Auto Parts, Maloney Tool & Mold and Armstrong Lumber. ... His fourth career ULMS victory is his first since Sept 29, 2007, at McKean County Raceway. ... The 38-year-old Blair is celebrating his 25th year of racing. ... Eighteen of 20 starters were running at the finish, 11 on the lead lap. ... ULMS made its debut at Tri-City, but the series returns to the Franklin track for races May 31 and Aug. 9. ... ULMS competitors return to action May 9 at McKean County Raceway in East Smethport, Pa., for the $2,500-to-win Dave Lundgren Memorial.