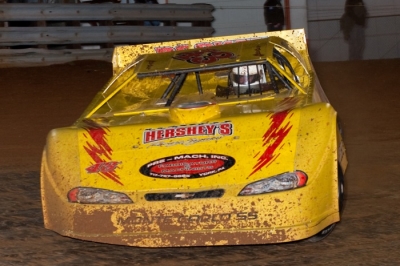 HAGERSTOWN, Md. (April 11) — Jason Covert has long looked up to one of Pennsylvania's top Dirt Late Model racers, Rick Eckert. Covert has done his share of chasing Eckert during his career, but this time it was Eckert trying to keep up as the York Haven, Pa., driver captured the Three State Flyers event at Hagerstown Speedway. | Slideshow

Covert, overtaking Eckert of York, Pa., on a lap-11 restart, led the rest of the 35-lapper for a $3,000 payday on the first-year tour. Eckert, who started on the front row alongside Covert, settled for second with Gary Stuhler of Greencastle, Pa., Andy Anderson of Martinsburg, W.Va., and Jeremy Miller of Gettysburg, Pa., rounding out the top five.

“It’s amazing to race with him," Covert said of outrunning Eckert. "He’s one of my heroes and he’s done a lot for me. I’d rather him or I win, but I’d just as soon I win; he’d say the same thing."

“We just happened to have things go our way tonight. We might come back here and not make the Lucas race. We didn’t make it last year. I screw up a lot but Barry gives me a heck of an opportunity to do this. It’s great to be here. This is the place to win.”

Eckert took control at the outset with Covert, Stuhler and Mike Lupfer giving chase after the first- and second-place finishers in four heat races drew for the top eight starting spots. Eckert kept Covert at bay on a couple of early restarts, but when the green reappeared after a lap-11 yellow, Covert stuck his car's nose under Eckert on the backstretch and didn’t look back on the half-mile oval.

"On restarts everyone was running the bottom and getting the top dirty," Covert said. "I wanted to get to the top and get out there earlier to make my speed get going. I couldn’t get off the corners. He could drive up off the corners, he had so much traction compared to what I had but on that restart, he moved out just enough to let me get by. These (American Racer) tires fire on restarts.”

By the time Covert was lapping competitors on lap 19, he was three seconds up on Eckert and never missed a beat during the final caution-free stretch of racing. The leader kept a cushion of lapped cars and finishing 3.2 seconds ahead of Eckert. Miller ran as high as third with five laps remaining, but slipped back to fifth in the closing laps.