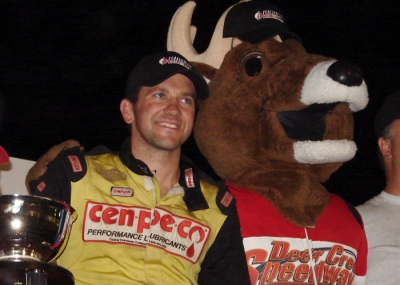 SPRING VALLEY, Minn. (July 9) — Brian Birkhofer surged into the lead at the initial green flag and never looked back, rolling to a flag-to-flag victory in the 29th annual Featherlite Trailers Gopher 50 at Deer Creek Speedway. The 36-year-old from Muscatine, Iowa, was clearly the dominant force as the World of Outlaws Late Model Series Wild West Tour opened before a near-capacity crowd at the Queensland family’s 3/8-mile oval and the Speed television cameras. | July 10 event at Brainerd rained out | Slideshow

“I’ve had a hard time even finishing races here in the past,” said Birkhofer, who earned $10,250 for his first-ever triumph at Deer Creek and second WoO checkered flag of 2008. “But this is a fun place and it’s only three-and-a-half hours from home, so I’m pumped to finally win one here — especially against the caliber of drivers that were here tonight.”

Birkhofer was never seriously threatened after using his outside-pole starting spot to outgun defending WoO champion Steve Francis of Ashland, Ky., for the lead when the race began. He was slowed only by two caution flags for minor incidents — both on lap 13 — en route to a 2.016-second margin of victory over WoO points leader Darrell Lanigan of Union, Ky. Clint Smith of Senoia, Ga., started and finished third, less than a half-second ahead of fourth-place Shane Clanton of Locust Grove, Ga. Josh Richards of Shinnston, W.Va., finished a distant fifth.

Birkhofer’s win was the sixth of his career on the WoO. He became the fourth repeat winner in 19 WoO events this season, joining Richards (four wins), Billy Moyer of Batesville, Ark. (four) and Lanigan (two).

It was Birkhofer’s second career win in the prestigious Gopher 50, a long-running event that is promoted as a fundraiser by the Blooming Prairie (Minn.) Lions Club International. He previously was victorious in 2004, when the race was held for the last time at the Steele County Fairgrounds in Owatonna, Minn., before moving to Deer Creek and becoming a stop on the WoO the following year.

“This isn’t a $40,000-to-win race, but it means a lot to win it,” Birkhofer said. “These people who put the Gopher on do a phenomenal job of promoting the race. They really work hard it. I just wish more people would promote races like this.”

The triumph came behind the wheel of the still-unnamed chassis that Birkhofer built with fellow racer Jimmy Mars of Menomonie, Wis., and Mars’s brother Chris.

“Jimmy’s been pretty dominant in his (Mars/Birkhofer) car the last couple of weeks, but I’ve been stubborn about doing one thing to my car,” said Birkhofer, whose previous WoO victory this season came on May 4 at Monett (Mo.) Speedway. “I listened to him tonight because I watched how good he’s been running, and it’s definitely better. Once that racetrack got that black (groove) — man, this car just felt great.” Birkhofer’s biggest challenge was finding the correct line to navigate the high-banked oval.

“It was a racetrack where you had to chase the groove around,” said Birkhofer, whose Daufeldt Transportation/J&J Steel car carried a Pro Power engine. “I got a good start and got rolling around the top, but I kinda looked over my shoulder one time and thought I saw Lanigan trying to run the bottom so I moved down (to the inside lane). I was like, ‘This feels a little better,’ so I just stayed there and tried to attack lapped traffic.”

Lanigan, who started 10th in his GottaRace.com Rocket car, reached second place on lap 27 when he passed Smith. It appeared he was closing on Birkhofer at one point, but Birkhofer negotiated slower cars with ease and took the checkered flag nearly three-quarters of a straightaway ahead of Lanigan.

“I’d liked to have seen a yellow once I got to second,” said the 38-year-old Lanigan, who padded his points lead with his 11th consecutive top-five finish. “Without having to deal with lapped traffic, maybe we could’ve given him a run. But what I really needed was a better starting position. You can’t start 10th and beat these guys very often.”

Smith, 43, climbed as high as second immediately after the lap-13 caution periods, but he couldn’t maintain enough speed with his J.P. Drilling GRT car to make a bid for the top prize at a speedway he called “my favorite racetrack.”

“I just was softer than both of them (Birkhofer and Lanigan) on tires,” said Smith. “We thought the track was going to be more like it usually is here, but it was a little bit different. When I couldn’t get any traction late in the race, they put a half-track on me.”

Francis was the race’s most notable casualty. He had just moved to second on lap 13 when the engine in his Dale Beitler-owned No. 19 went up in smoke, leaving him with a 24th-place finish.

The night’s action was taped for broadcast on Aug. 16, at 4 p.m. EDT on the Speed cable network.