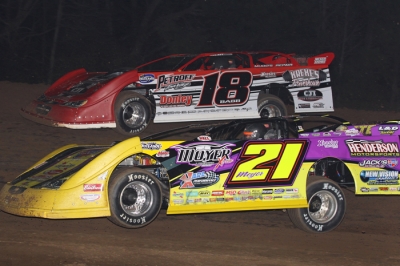 LITTLE ROCK, Ark. (March 29) – On a track that rewarded aggression, Billy Moyer had more than enough in him to capture Saturday’s 50-lap World of Outlaws Late Model Series event at I-30 Speedway.

“Made an old man work tonight,” the 56-year-old Dirt Late Model Hall of Famer from Batesville, Ark., cracked after pulling off a pair of breathtaking moves en route to a resounding home-state victory worth $10,150. | Notebook | RaceWire | Slideshow | Video

Twice Moyer vaulted past two cars in a explosion of power — first on a lap-17 restart when he sliced between Rick Eckert of York, Pa., and Shannon Babb of Moweaqua, Ill., off turn two to go from fifth to third, and again on a lap-18 restart when he soared around the outside of Darrell Lanigan of Union, Ky., and Shane Clanton of Zebulon, Ga., through turns one and two to assume command.

“When the car’s good you can make things happen like that,” said Moyer, who started sixth. “I’ve been working my butt off to make this car better and tonight it was good enough to make some moves.”

Moyer was scored the leader for the first time on lap 19 and never looked back. With the race’s final 32 circuits running caution-free, he turned back a late challenge from Lanigan while negotiating lapped traffic to earn his first WoO triumph of the season and the 41st of his career.

Lanigan, 43, settled for a runner-up finish after starting from the pole position and leading laps 1-6 in his Club 29 car. Clanton, who won last year’s inaugural WoO event at the 3/8-mile oval outside Little Rock, Ark., slipped to third in the final rundown after pacing laps 7-18 in his Capital Race Car.

Tim McCreadie of Watertown, N.Y., advanced from the 11th starting spot to place fourth in the Sweeteners Plus Rocket — his first top-five WoO run of 2014 — and Babb started and finished fifth in his first WoO start of the season with his one-race-old Rocket mount.

When the race restarted, Moyer shot to the outside of the high-banked speedway through turns one and two and immediately overtook Lanigan and Clanton.

“That was my plan,” said Moyer, whose last WoO victory was on April 6, 2013, at Farmer City (Ill.) Raceway. “I could see a couple restarts before that for the initial couple laps (after the green flag flew) you could stick out there on the top because there was some wet dirt thrown up there.

“It seemed like everybody was on defense trying to protect that bottom so bad, but I think it showed that if you were brave enough to just move up and run in the middle there was something there. That’s what we did and it worked out.

“It’s nice to get a win not-too-far from home here,” he added. “We don’t get to run big shows here in Arkansas too often, so to knock this one off is pretty cool.”

Lanigan credited Moyer with executing his winning pass to perfection.

“I didn’t know who was gonna be on the outside on that restart,” said Lanigan. “Then Moyer got up there outside of me, and he snuck by Clanton when Clanton got in a rut. He did a good move on the outside.

“I got close to (Moyer) when he hit some (lapped traffic) and I tried the outside a couple times. But I couldn’t make it stick up there — and I thought somebody was on me, so I went back to protecting the bottom. We had a good car, but just fell a little short.”

Clanton, 38, felt that the lap-18 stoppage to clean up the tangled machines in turn two might have cost him the race.

“I think we had a tire seal over during that red,” said Clanton, who started third. “I just couldn’t steer no more. The right-front wouldn’t steer through (turns) three and four and I was having to slide it. Before I was driving through the corner, so I know that red hurt my tires a little bit. I don’t know if I needed to sipe ‘em a little more, but something happened to ‘em.”

While Clanton did register his first top-five finish of the 2014 WoO campaign, he craved an I-30 repeat.

“We gotta keep our heads up knowing that we had the fastest race car at the beginning of the race and if there wasn’t a red we maybe could’ve won,” said Clanton.

Three caution flags slowed the event. Wendell Wallace of Batesville, Ark., stopped in turn two on lap nine with steam billowing from his car after the belts popped off the engine as he ran in third place; Boom Briggs of Bear Lake, Pa., stopped in turn four on lap 15; and Tommy Surrett of Little Rock, Ark., spun between turns three and our on lap 17.

Notes: The winning Moyer Xtreme by Longhorn is powered by a Clements Automotive Engine and sponsored by Banner Valley Hauling, Crop Production Services, Henderson Motorsports, Watters Autoland, Carquest Auto Parts and Sunoco. … Lanigan ended the night leading the WoO standings by 22 points over Sheppard, who rallied from the rear of the field after his Rocket Chassis house car was swept up in the lap-18 incident. … Eric Wells of Hazard, Ky., salvaged a 10th-place finish after starting 23rd thanks to a provisional spot. … Chub Frank of Bear Lake, Pa., drove one of Rick ‘Boom’ Briggs’s cars to a seventh-place finish. … Tanner English of Benton, Ky., drew a loud roar from the evening’s big crowd after a turn-one accident during the second B-Main prompted him to run the length of the homestretch and jump on the hood of Robbie Stuart’s car in turn four to show his displeasure with the Louisiana driver. … The next World of Outlaws event is the Illini 100 on April 4-5 at Farmer City Raceway.