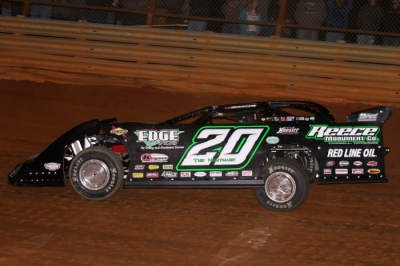 Jimmy Owens of Newport, Tenn., had the field covered Friday on opening night of the Old Man’s Garage Spring Nationals presented by Schaeffer’s Oil Spring Thaw weekend at Volunteer Speedway, driving to a $4,000 victory in the 40-lap feature in his first start behind the wheel of a new Club 29 car. | Slide Show | Video |

With Club 29 chassis proprietor Darrell Lanigan looking on from the pit area, Owens burst off the outside of the front row to grab the lead from polesitter Chris Madden of Gray Court, S.C., at the initial green flag and never looked back. He experienced trouble aside from some headaches in lapped traffic as he roared to his first victory of 2014 over Madden, who has been the hottest driver in the Southeast this season.

“We had a pretty good car all night long,” said Owens, whose own Reece Monuments crew combined with Lanigan and Lanigan’s crew chief, Jason Jameson, to tune the Club 29 machine at the high-banked, 4/10-mile oval. “It’s a new car, and it’s good to come out of the box with a win. Maybe we can keep doing this all year long.

“I could run up high and down low, but for the most part it was kind of hard to get through lapped traffic. Some of them weren’t holding their line a little bit there, but it makes it exciting.”

From the start Owens was in a class by himself, breaking away from Madden and Scott Bloomquist of Mooresburg, Tenn., who spent most of the race embroiled in a heated battle for second place.

Long green flag runs were to the advantage of Bloomquist, who got to the inside of Madden about a dozen laps into the race and appeared poised to take away the position.

A battle of side-by-side lapped cars ended Bloomquist’s initial challenge prior to a lap-16 caution for a minor spin, and later Bloomquist was completely inside of Madden when a lap-37 caution flag for debris on the track snuffed out his best opportunity to complete a pass.

Owens, 42, was untouchable over the final three-lap sprint, controlling the action to cross the finish line several car lengths ahead of Madden, who held off Bloomquist to place second. Bloomquist settled for third place, Mike Marlar of Winfield, Tenn., placed fourth and 25-year-old Eric Wells of Hazard, Ky., completed the top five.

Coming off of a pair of high-dollar National Dirt Racing League victories – a $12,500 score on March 8 at Smoky Mountain Speedway in Maryville, Tenn., and a $17,017 winning payday at East Alabama Speedway in Phenix City, Ala., the weekend before – Madden recorded Friday night’s fastest qualifying lap (13.290 seconds) and started from the pole position but fell short of another victory lane trip.

Madden , 38, said the setup on his Bloomquist Race Car was too tight for the feature, which caused his car to “push like a freight train.”

“I figured Scott (Bloomquist) was going to pass me, but the caution (on lap 37) saved me and gave me another shot to run second,” said Madden. “We were way too tight, and I was just trying to hold my own and keep my momentum up. I’m sure he was better than I was if he could have ever cleared me.”

The 50-year-old Bloomquist, meanwhile, said he didn’t have enough racetrack to get by Madden at a speedway he knows well.

“It looked like he got pretty tight,” Bloomquist said of Madden. “It’s just really tough out there — slippery, and we couldn’t do much passing. We were underneath Chris and thought we were going to be able to get him, and that caution came out. That let the tires cool off a little bit and he got fired back up. Hopefully we can work on it and get a little bit better for tomorrow.”

Notes: Owens’s Cornett-powered Club 29 is owned by Mike Reece and sponsored by Reece Monuments, Gantte Appraisals, Edge Services, Midwest Sheet Metal and Keyser Manufacturing…. The victory was Owens’s first-ever on the Ray Cook-promoted Spring Nationals series, which has had 10 different winners in as many races since its birth in March 2013…. The evening’s top-eight qualifiers – Madden, Owens, Wells, Bloomquist, Marlar, Chad Ogle, Casey Roberts and Michael Chilton – were locked into the feature via time trials; the remaining drivers ran ‘last chance heat races’ to secure feature starting spots…. Tom Maddox of Centre, Ala., who made the feature cuts thanks to a daring finish line pass for the final transfer spot in his last chance heat race…. Jenson Ford of Piney Flats, Tenn., dominated the 30-lap Crate Late Model race, maintaining a half-straightaway lead over Tim Maupin of Johnson City, Tenn., most of the distance to take the win…. The Old Man’s Garage Spring Nationals Presented by Schaeffer’s Oil Spring Thaw weekend concludes on Saturday night with a 60-lap A-Main paying $10,000 to win….