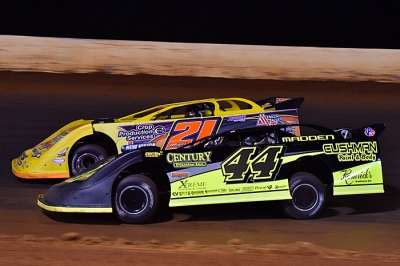 Securing his third five-figure triumph in seven overall starts in 2014, Madden drove past race-long pacesetter Billy Moyer Jr. of Batesville, Ark., for the lead on lap 44 of the 60-lap A-Main and controlled the remainder of the distance. It was his second triumph in three NDRL points races this season – and combined with a runner-up finish in the previous night’s 40-lap Tennessee Tipoff opener, left him as the fledgling tour’s points leader.

“That’s pretty awesome,” Madden said of his spectacular start to the ’14 campaign, which also includes a $17,017 score in the NDRL Bama Bash on March 1 at East Alabama Motor Speedway in Phenix City, Ala., and a $10,000 checkered flag in a Lucas Oil Late Model Dirt Series event on Feb. 7 at Golden Isles Speedway in Brunswick, Ga. “That’s all I can say about that.”

Madden, 38, flexed the muscle in his Bloomquist Chassis car after the feature’s lone caution flag flew on lap 13 when fifth-running Casey Roberts of Toccoa, Ga., slowed. On the restart Madden vaulted past outside polesitter Jonathan Davenport of Blairsville, Ga., for second and began stalking Moyer Jr., who started from the pole position.

By lap 35, Madden was on Moyer’s rear bumper and bidding for the lead. Finally, on lap 44, the veteran swung to the outside of the 26-year-old pacesetter through turns three and four and surged into the lead for good.

Scott Bloomquist of Mooresburg, Tenn., passed Moyer for second on lap 49 and briefly threatened Madden, but the home-state start couldn’t maintain his pace and ultimately lost the bridesmaid position on lap 55 to the charging Mike Marlar of Winfield, Tenn.

Marlar, who started 10th, never drew close to Madden but registered a solid second-place finish. Bloomquist settled for third after starting seventh, Davenport was fourth at the checkered flag and Moyer faded to fifth after leading laps 1-43.

Madden was a smiling victor following the race. He credited his success to his crew, reserving special recognition for his mechanic nicknamed ‘Tadpole.’

“Tadpole worked hard this week,” said Madden. “He stripped this thing all the way down from Gaffney (Cherokee Speedway) – we beat it up there. He put it back together and got this thing back fast just like we had it.”

With his strong blast out of the NDRL starting gate, Madden was asked in Victory Lane if he might consider running the John Kennedy-founded national tour in pursuit of its $65,000 champion’s prize. He didn’t rule out the possibility.

“We’re gonna definitely have to weigh it out and see what we wanna do,” said Madden. “I’d love to be able to run a circuit like this and run for the points and try to do the best we can do. We’re definitely gonna have to look at it and think about it.”

The 36-year-old Marlar, meanwhile, had no excuses after coming up one spot short to Madden in his Ronnie Delk-owned machine.

“You know what, they give me plenty (of laps),” Marlar said when asked if a slightly longer race would have provided him a shot at catching Madden. “I just zigged when I should’ve zagged a couple times in the race.”

Bloomquist, 50, thought he had a car to challenge Madden after reaching second place but couldn’t match his understudy’s speed.

“We went with a softer left-rear (tire) tonight like Chris did,” said Bloomquist. “We got to catching him a little bit and (then) overdrove the little bit and the tires gave up. But Chris ran a great race and Little Billy Moyer ran a pretty decent race himself.”

Notes: Madden’s Bloomquist Race Car is powered by a Clements Automotive Engine and sponsored by Century Plastics, Henderson Amusements, Cushman Paint & Body, Hamrick’s of Gaffney, Ohlins Shocks, Hypercoils and VP Fuels. … Friday-night winner Dale McDowell of Chickamauga, Ga., wasn’t a factor in the finale. He started fourth but slipped backward to finish sixth in the A-Main…. Tommy Kerr of Maryville, Tenn., who drives a Blount Motorsports car fielded by Smoky Mountain co-owner Larry Garner, rebounded with a ninth-place finish after failing to qualify on Friday night. His teammate, Billy Ogle Jr. of Knoxville, went in the opposite direction, absorbing a 23rd-place finish after running in the top five on Friday evening…. Two drivers with intentions of following the NDRL series – Billy Moyer of Batesville, Ark., and Bub McCool of Vicksburg, Miss. – used provisional starting spots to gain entry to the A-Main for the second consecutive night…. Jimmy Elliott of Cleveland, Tenn., won the evening’s Crate Late Model feature…. The next action for the NDRL is the Bluegrass Nationals on March 28-29 at Kentucky Late Motor Speedway in Calvert City, Ky.