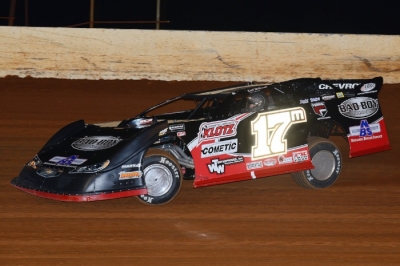 Fulfilling the promise he showed during a strong season-opening visit last month to Florida’s Volusia Speedway Park, McDowell steered his Team Dillon Warrior car off the outside pole to grab the lead at the start of Friday’s headliner and never looked back. He paced every circuit of the caution-free event to record his first triumph of 2014 and pocket $7,500.

“The car was good,” said McDowell, who began his ’14 campaign last month at Volusia with consecutive finishes of second and third and was in position to bid for a win in his third start when mechanical trouble knocked him out. “I tore it up last week (at South Carolina’s Cherokee Speedway) and Shane (McDowell and the crew) fixed it – so I think we’re running better because of that, because I’m not over there working on it. My hat’s off to those guys. I just kind of hold the wheel.”

McDowell, 47, was tailed closely by Ray Cook of Brasstown, N.C., during the first half of the feature but steadily pulled away from the pack as the race wound down. The veteran driver crossed the finish line with a commanding victory margin of 6.292 seconds over third-starter Chris Madden of Gray Court, S.C., who slipped by Cook for second place at mid-race and held the spot for the remainder of the distance.

“I was trying to pick my way through traffic and when you’re up front it’s kind of hard to know where you need to be,” said McDowell. “I think I found something there at the end that helped me.”

With no caution flags to tighten the pack, Madden was unable to seriously test his Bloomquist Chassis machine versus McDowell on open track.

“He kind of got stretched out from me there before I got into second and I never really got to race with him,” said Madden, who who won the NDRL points-season opener on March 1 at East Alabama Motor Speedway in Phenix City, Ala., and remained atop the fledgling tour’s points standings with his runner-up finish. “Maybe it could have been a different story if it went caution.”

Cook, who started from the pole position, settled for a third-place finish driving a brand-new MasterSbilt house car. Billy Ogle Jr. of Knoxville, Tenn., moved into the top five after the halfway mark and finished fourth in a Blount Motorsports car fielded by Smoky Mountain co-owner Larry Garner and NDRL Rookie of the Year contender Kent Robinson of Bloomington, Ind., completed the top five after starting fourth.

Notes: McDowell’s Race Car is powered by a Clements Automotive Engine and sponsored by Bad Boy Buggies, Klotz, Ferris and MBS…. McDowell’s first-ever NDRL victory came in his third career start on the John Kennedy-owned series. His only previous NDRL appearances came last October at Pittsburgh’s Pennsylvania Motor Speedway in Imperial, Pa., where he scored finishes of third and 20th during the Pittsburgher 100 weekend…. Kent Robinson won a heat race and started fourth in the A-Main for the second consecutive NDRL event…. Williams Thomas of Phenix City, Ala., who finished 14th, made his second straight NDRL start with a cast covering his left hand. He recently underwent surgery on his left thumb due to complications related to an infection…. Defending NDRL champion Billy Moyer of Batesville, Ark., was one of six drivers who relied on provisional spots to start the A-Main. Moyer and Dennis Erb Jr. of Carpentersville, Ill., claimed NDRL points provisionals; Tim Fuller of Watertown, N.Y., and Mason Zeigler of Chalk Hill, Pa., used provisionals they were granted by virtue of running the NDRL’s January events in Tucson, Ariz., and El Paso, Texas; and Steve Francis of Ashland, Ky., and Bub McCool of Vicksburg, Miss., were forced to use NDRL emergency provisionals and thus forfeited their start money…. Among the evening’s non-qualifiers were three drivers running cars fielded by Smoky Mountain’s co-owners: Tommy Kerr (Garner’s Blount Motorsports No. 4K), Skip Arp (Stanley Best) and Robby Moses (Roger Sellers)…. Cory Hedgecock of Loudon, Tenn., won the evening’s Limited Late Model feature…. The NDRL’s Tennessee Tipoff concludes on Saturday night with an A-Main paying $12,500 to win.