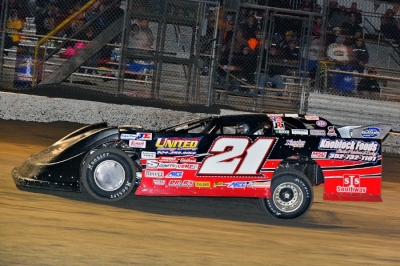 The 47-year-old veteran from Ocala, Fla., authored one of the drives of his career, turning back a field filled with national stars to win the 30-lap UMP DIRTcar feature that opened the full-fender portion of the 43rd DIRTcar Nationals presented by Summit Racing Equipment. | Complete Speedweeks coverage

An accomplished Sunshine State racer who has won often in local and regional competition at the half-mile oval, Lloyd became the first driver from Florida to capture a Dirt Late Model feature during the DIRTcar Nationals by Summit since Jacksonville’s Earl Pearson Jr. topped a DIRTcar-sanctioned event on Feb. 10, 2009. He earned $7,000 for his efforts.

“This is the biggest win,” said Lloyd, who has driven Late Models on both dirt and asphalt for three decades. “There’s races that pay more money, but this is by far the career-topper, to win this. To have all these guys here and race these guys, it’s neat.”

Lloyd started from the outside pole and led every circuit but was chased throughout the distance by Brady Smith of Solon Springs, Wis., who drew within a couple of lengths of the leader several times in the closing laps before settling for second place.

Eric Wells of Hazard, Ky., finished third after starting from the pole position, giving him a career-best performance at Volusia. Fifth-starter John Blankenship of Williamson, W.Va., slid into fourth place on lap 14 and finished there and Shane Clanton of Zebulon, Ga., slipped backward from the third starting spot to finish fifth.

Lloyd’s victory was his first-ever during the Super Late Model portion Florida Speedweeks.

“We usually shy away from here during Speedweeks strictly because I can race for two months on the abuse you put on a motor here in a week,” said Lloyd, who operates a machine shop in his hometown of Ocala, about 50 miles west of Volusia. “But with the new motor (his partner, J.B. Harris, obtained a Race Engine Design powerplant for the 2014 season) we wanted to come over here and race some.”

The decision to make an assault on Volusia paid off — after Lloyd stuck to his guns on tire choice, of course.

Lloyd’s strategy for the A-Main? “Just not get beat on tires like I have been all weekend,” he said, referring to his runs the previous three nights in World of Outlaws Late Model Series events at Bubba Raceway Park in Ocala, Fla. “We made our decision after the heat race was over based on what happened to us the last three nights. We decided to stay with (the tires) we were on and just go at it and live or die by it.”

Perching his Snow Brothers-built car on the outside of the fast D-shaped track, Lloyd kept the field at bay from start to finish. Smith was well within striking distance over the final 10 laps, but Lloyd didn’t flinch.

“We know this track well as far as where to drive around the track,” said Lloyd. “J.B. was giving me signals, so I knew I had a little bit of room and just tried to make good laps. That’s all you could do – make good laps and not hit a hole wrong and get yourself up in the cushion.”

Smith, 36, was satisfied to continue his stretch of strong Speedweeks results, adding a runner-up finish to his first-, second- and third-place runs over the previous three nights at Bubba Raceway Park.

“We certainly didn’t change much, but we made our car just a little bit too tight,” Smith, who started fourth, said of his Rocket machine. “I didn’t expect the conditions to stay this fast either, so maybe we misjudged the racetrack too.

“I could see (Lloyd) was getting tighter down (in turns three and four) and I thought that’s where I might be able to make my move. But the time when he made the biggest mistake I also made a mistake, so we had to settle for second.”

Just one caution flag slowed the event, on lap seven when Mike Marlar of Winfield, Tenn., stopped in turn four when he got a hole in his car’s radiator.

The Late Model feature should roll by 10:15 p.m. ... A wreck with three laps remaining in the modified feature caused a delay of nearly a half hour after Nick Hoffman lost a left-rear wheel in front of most of the field in turn four. Kenny Wallace's car got upside down at the flagstand, but no one was injured. Ty Dillon won the $5,000 event. ... Front-row starters Eric Wells and Ivedent Lloyd Jr. are both gunning for their first DIRTcar Nationals victory. … Wells finished second to Josh Richards in last year’s Tuesday night show while Lloyd has won dozens of weekly and regional tour events at Volusia. … Tommy Hicks, crew chief for Wells, isn’t crazy about his driver starting on the pole. “If you start up there, there’s only one place you can go,” Hicks said. … Lloyd had a couple of solid runs at his hometown Bubba Raceway Park in Ocala over the weekend, but he was beaten by drivers on softer tires. He and long-time supporter J.B. Harris have decided that’s not going to happen with plans to use the softer tires allowed, Hoosier LM-10s. “We’re just going to die on soft tires and see how it goes,” Harris said. Lloyd’s confident the track will continue to be easy on softer rubber and retain the moisture it has throughout the night. “That brown on the top (of the track) is there,” he said. “I think it’s going to stay there.” … Dennis Erb Jr. scratched from his consolation race after breaking his engine at the conclusion of his heat race. … Stacy Boles, who held the second spot early in his consolation race, exited after the axle slid out the right side of the car. The crew was making repairs and expected to be ready for Tuesday’s action.

Brady Smith slammed the door on fellow front-row starter Casey Roberts outside turn two on the first lap and raced to a straightaway victory in the final heat. Roberts lost the second spot to Morgan Bagley on the fourth lap and ended up third while Eric Jacobsen got the fourth and final transfer spot as Volusia wrapped up a session of caution-free heats. Dennis Erb Jr. slowed on the white-flag and pulled to the infield near the race's conclusion.

Fourth-starting Shane Clanton went under polesitter Brian Shirley on the fifth lap in turn two and led the rest of the way. Mike Marlar finished just behind in second while Brandon Sheppard, who slipped high exiting turn two on the first lap, recovered to finish third. Just after losing the lead, Shirley got way too high in turns three and four and slipped back to fourth, where he finished in the final transfer spot.

With fast qualifier Billy Moyer slipping back to sixth at the outset, outside front-row starter Ivedent Lloyd Jr. cruised to victory in the second prelim. He took the checkers a half-straight ahead of polesitter Gregg Satterlee while Scott Bloomquist and Dan Stone got the other two transfer spots. The fourth-starting Moyer never recovered from slipping high in turn two and finished sixth. Chuck Julien's engine went up in smoke as he completed his first lap.

Four drivers from each of four heat races transfer to the 30-lap main event along with four cars apiece from each of two consolation races. The main event pays $7,000-to-win.

Billy Moyer is the winningest DIRTcar Nationals driver with 19 career Volusia victories. Other multiple-race winners are Scott Bloomquist (eight victories) of Mooresburg, Tenn., Rick Eckert (seven) of York, Pa., and Tim McCreadie (five) or Watertown, N.Y. … The car count is down somewhat after Volusia averaged 50 Late Models per night last year. … Four drivers are entered who haven’t competed at any other Georgia-Florida Speedweeks track: Kyle Bronson of Brandon, Fla., Jeff Beyers of Pana, Ill., Stacy Boles of Clinton, Tenn., and Tyler Bruening of Decorah, Iowa. … Beyers is racing for the first time in 2014 after just four outings last season. … Among drivers in the pits who aren’t racing tonight include Don O’Neal, Steve Francis, Jimmy Owens, Tim Fuller and Dale McDowell. … The team of John Winge of Sioux Falls, S.D., had a scare this afternoon when a faulty generator in his hauler burned a portion of insulation. The pits were cleared, but a track worker used a fire extinguisher before the track safety crew and later a Volusia County fire truck came to make sure all was well. “They took their heat sensor and made sure everything was cooled down,” crew chief Brad Baum. The exterior of the hauler didn’t look too bad, but a portion of the flooring and wall in the living quarters were ripped out. … UMP modifieds are also in action on their second-to-last night at Volusia for the $5,000-to-win Gator Championship. … The UMP modifieds wrap up with Triple 20s on Tuesday while big-block-modifieds compete Wednesday-Saturday.