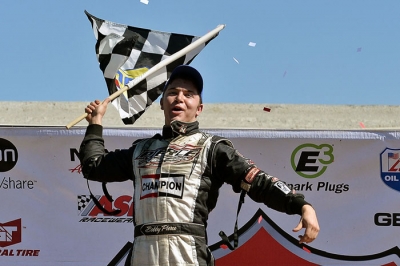 Never better than 10th in four previous features during the week-long miniseries, Pierce started on the pole and ran virtually unchallenged, leading all 35 laps en route to a $7,000 victory, the 17-year-old driver's first at East Bay and first on the national tour.

“Today I wasn’t expecting this. We’ve been struggling all week,” Pierce said in victory lane. “You never know what’s going to happen on these day shows. You get a good qualifying lap, and there’s a lot of luck that plays into it.

“We’ve been working so hard, you know, just the struggles we’ve been going through. I know we’ve all been frustrated so much. But you know, I’m so glad to get a win here finally. This is my fourth year being here and I’m just so glad I could finally pull it off.”

Third-starting Gregg Satterlee chased Pierce throughout the race but never could seriously challenge on the daytime racing surface that forced competitors to stick with a single groove.

The slightest of troubles for Pierce came up in the final laps when Dennis Erb Jr. slowed with a flat right-rear tire, bottling up lapped traffic a bit as Pierce negotiated slower cars. But Pierce managed to find his way to the checkered flag in becoming a rare teen-aged winner in Super Late Model action at East Bay.

Pierce, who went to a second car after his struggles in his primary machine, was thrilled to reach victory lane during a Florida Speedweeks event. “Florida’s one of the neat places you want to win at,” he said.

His Hall of Fame father Bob, a driver-turned-chassis builder, was proud of the accomplishment.

“Man, I’ll tell you what, as usual the kid did something I couldn’t do. I never won a race at East Bay, so he pulled it off,” the elder Pierce said. “Day, night, it don’t matter, it’s still East Bay. He did a great job and I’m so proud of him.”

The runner-up Satterlee’s No. 22 machine showed occasional smoke through the second half of the race as he did his best to keep up with Pierce.

“Bobby did a good job. He stayed where he needed to, just stayed right in his line,” said Satterlee, who notched his second straight top-five finish during his first-ever week at East Bay. “We had a good car. I thought there when we got into lapped traffic that maybe it was going to get interesting depending on what he did with it, but he just stayed behind there. I was right there at the end. To try to take a chance to pass in this condition can cost you some spots, so I just stayed where I was and took second.

“We have an oil leak somewhere around the motor. An oil line’s coming loose. We’re hoping the motor’s OK. It seemed to run fine. I never lost oil pressure, so we’ll get back to the trailer and see what we can find out on it.”

Francis picked up his two spots quickly and settled for a podium finish on the daytime racing surface.

The race’s lone yellow flag flew at the end of the first lap when Jimmy Owens and Ray Cook briefly came together on the frontstretch, and the resulting scramble sent Devin Moran spinning exiting turn four.

The second half of Saturday’s doubleheader is a $10,000-to-win points race with hot laps scheduled for 6 p.m.

Notes: Pierce’s Bob Pierce Race Car has a Pro Power Racing engine and sponsorship from Champion Spark Plugs, the Pierce Posse, M&M Painting and Construction, Murphy Trucking and Petersen Aluminum. … At 17, Pierce is likely East Bay’s second-youngest Winternationals winner in Super Late Model action; Tyler Reddick was 15 when he won Feb. 9, 2011. … Seventeen of 26 starters completed 35 laps with DirtonDirt.com Strawberry Dash winner Mike Benedum the last car on the lead lap. … Nineteen drivers were running at the finish. … A handful of starters were start-and-park entries, electing to save tires and equipment for the evening event.

Polesitter Kenny Pettyjohn led all the way and transferred to the main event along with Booper Bare, Chad Hollenbeck and Kevin Weaver. A lap-two yellow appeared when Joey Denby and Jim O'Hara touched in turn two, getting O'Hara sideways to collect Adam Bowman. Dennis Franklin and Vic Coffey were also caught up in the mess. Franklin retired.

Polesitter Ray Cook blasted quickly away from the field and cruised to an easy victory in the final heat. He lapped Jim O'Hara and finished more than a straightaway ahead of the field. Third-starting Eric Jacobsen had his hands full with Randy Weaver most of the way in finishing second while Jacobsen, Tail-starting Jason Hughes and Dan Stone finished among the five transfer spots. Vic Coffey was further back in sixth.

Fast qualifier Billy Moyer Jr. took command at the drop of the green and cruised to an easy victory, setting up a front-row of second-generation drivers for the main event. Outside front-row starter Dennis Erb Jr. couldn't keep up in finishing second as he held off a late challenge from fellow Illinois driver Brian Shirley. Jared Landers was fourth while Jason Riggs, Shirley's teammate, rounded out the top five in the caution-free affair.

Third-starting Gregg Satterlee chased polesitter Jimmy Owens into the opening corners, but Satterlee roared down the backstretch to take command of the prelim and lead every lap. Owens finished just behind in second, nosing underneath a few times, while Don O'Neal finished third. Jason Papich was further back in fourth while John Blankenship, the runner-up in Friday's feature, got the final transfer spot. Outside front row starter Booper Bare faded to finish sixth.

Bobby Pierce beat polesitter Eddie Carrier Jr. into turn one, put his car in the low groove and led all the way in the first 10-lapper. Third-starting Steve Francis dropped Carrier to third and he finished far behind the top two in the caution-free affair. Justin Rattliff was a half-track behind the leaders in fourth with Davey Johnson fifth for the final transfer spots.

Moyer turned a lap of 15.196 seconds at the third mile oval to earn a pole starting spot for one of four heat races. Other heat race polesitters: Eddie Carrier Jr. of Salt Rock, W.Va.; Jimmy Owens of Newport, Tenn.; and Ray Cook of Brasstown, N.C.

Four heat races will send five drivers apiece to the main event while a B-main will transfer four drivers. The fastest qualifier not otherwise transferring and the winner of the DirtonDirt.com Strawberry Dash will start on the 13th row.

The $7,000-to-win, non-points event is a makeup of Wednesday’s rainout and will be followed by a $10,000-to-win points race this evening.

It’s a pleasant, sunny day in the mid-60s at East Bay with temperatures expected to cool into the 50s for the evening event. … Among 35 drivers entered are Monday’s winner Eddie Carrier Jr. of Salt Rock, W.Va., and Thursday’s winner Dennis Erb Jr. of Carpentersville, Ill. Billy Moyer of Batesville, Ark., history’s winningest Winternationals driver and winner of Tuesday and Friday’s features, has elected to skip the afternoon event. … East Bay has in recent seasons made up weeknight rainouts with weekend doubleheaders. ... Chad Stapleton of Edinburgh, Ind., is among drivers who have pulled out of the pits. … Hot laps for the evening program are scheduled for 6 p.m.