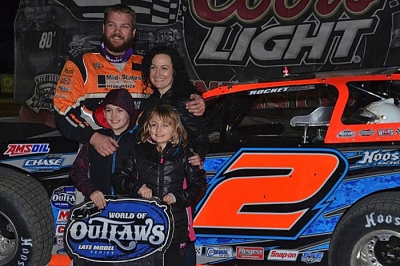 “We just couldn’t be happier with the support we’ve been getting (from Rocket Chassis),” Smith said after capturing the milestone 400th WoO event contested since the national tour was reborn in 2004 under the World Racing Group banner. “All those guys over there — (Steve) Baker, Mark (Richards), Cody (Duncan), Matt (Barnes), Josh (Richards) — have been just so helpful. I couldn’t be happier with the effort they’ve been giving me to help us get going here.”

Smith, 36, of Solon Springs, Wis., took off from his pole position starting spot and led the entire distance in his Vic Hill-powered car, but his $7,050 triumph in the first of three Bubba Army Dirt Late Model Winter Nationals events didn’t come easy. He had to hold off a furious late-race challenge from Brandon Sheppard of New Berlin, Ill. — the substitute driver of Mark Richards’s Rocket Chassis house car while reigning WoO LMS champ Josh Richards is sidelined by undisclosed medical issues — to secure his fifth career series victory.

The 21-year-old Sheppard’s last-lap bid fell short by 0.367 of a second as he settled for runner-up money. Darrell Lanigan of Union, Ky., finished about one second behind Sheppard in third driving his new self-designed Club 29 car. Rick Eckert of York, Pa., burst forward from the 12th starting spot to fourth place in 11 laps and stayed there to the finish in his Bloomquist car, while seventh-starter Tim Fuller of Watertown, N.Y., completed the top five in his Kennedy Motorsports Capital Race Car.

In a non-stop race that was completed in a mere 9 minutes, 28.214 seconds, Smith found himself dealing with heavy lapped traffic throughout the closing stages. Never far behind was Sheppard, who started fourth and reached second with a lap-10 pass of Lanigan.

Sheppard repeatedly slid underneath Smith in the corners of the egg-shaped, 3/8-mile oval over the final 10 laps, but Smith made the correct moves to hang on for his first WoO LMS checkered flag since Aug. 20, 2011, at Merritt (Mich.) Speedway.

“The lapped traffic was somewhat hellacious tonight so we had our hands full out there,” said Smith, whose best finish in four previous WoO LMS starts at BRP was a seventh on Feb. 16, 2013. “I was just trying to do the best I could without roughing anybody up too bad and still keep my pace up.

“I saw that blue nose (of Sheppard’s car) poked under me a couple times but just got back up on the wheel and tried to finish the job.”

Smith smiled broadly through a bushy winter’s beard while celebrating with family and friends during the postrace ceremonies. An annual competitor in Florida Dirt Late Model Speedweeks events since 2005, Smith was triumphant during the February stretch of action for the first time since Feb. 13, 2010, at Volusia Speedway Park in Barberville, Fla.

“I’m extremely happy to be here in victory lane,” Smith said. “I’ve got almost all my best supporters here — my family (wife Jenni and young children Travis and Rowan), a couple of my great sponsors (Michaletz Trucking and Jim Gummerson from Mid-States Equipment). This means a lot.”

“The lapped traffic was just tough,” said Sheppard, who registered a career-best WoO finish in the state of Florida. “Every time I’d get up there to (Smith), get close to him, we’d always catch up to lapped traffic. Every batch of lapped traffic we got to was two-wide, so it was hard to do anything with him.”

Shane Clanton of Zebulon, Ga., improved four positions to finish sixth in his first WoO LMS start driving a car fielded by his father-in-law Ron Davies while Mike Marlar of Winfield, Tenn., was seventh and earned the $500 bonus as the highest-finished non-touring regular who has never won a series event. Ivedent Lloyd Jr. of Ocala, Fla., placed eighth at his hometown track; Tim McCreadie of Watertown, N.Y., advanced from the 20th starting spot to finish ninth; and possible WoO LMS Rookie of the Year contender Frank Heckenast Jr. of Orland Park, Ill., rounded out the top 10.

Morgan Bagley powered to the outside of Tim McCreadie exiting turn four on the first lap and cruised to victory in a caution-free consolation race. McCreadie finished a half-straightaway behind Bagley in second, while Raymond Merrill and Casey Roberts finished a distant third and four to earn the final transfer spots. Mike Hammerle retired early in the race and Allen Murray scratched for the remainder of the evening following his heat race.

Second-starting Brady Smith overtook polesitter Darrell Lanigan entering turn three on the second lap and drove away from the field to win the third heat by nearly a straightaway. Mike Marlar pressured Lanigan for second late in the race, but couldn't quite find a way past. Rick Eckert and Ivedent Lloyd Jr. rounded out the top five, with Frank Heckenast Jr. securing the final transfer spot in yet another caution-free heat. Mike Hammerle and Allen Murray each retired after four laps.

Polesitter Brandon Overton fell back to third on the start, but overtook Eric Wells and Austin Kirkpatrick with a three-wide, highside move on the third lap and cruised to an easy heat race victory. Wells and Kirkpatrick raced side-by-side for much of the feature, with Wells narrowly holding off Kirkpatrick by less than a car length at the line. Chub Frank advanced from sixth to finish fourth in the caution-free affair, while Jack Sullivan and Clint Smith claimed the final transfer spots.

Piloting the Rocket Chassis house car in the indefinite absence of reigning World of Outlaws champion Josh Richards, Brandon Sheppard topped 27 qualifiers with a 14.872-second lap Friday to earn the pole of the first heat race. Along with Sheppard, Brandon Overton and Darrell Lanigan will start on the pole of the second and third heats respectively. Hometown driver Ivedent Lloyd Jr. tripped the clock third fastest overall in time trials, but was dropped to 15th as a penalty for arriving late to the track and will now start fifth in the third heat.

Darrell Lanigan (four victories) of Union, Ky., Josh Richards (two victories) of Shinnston, W.Va., and Rick Eckert (one victory) of York, Pa., are the only drivers to previously win World of Outlaws events at the D-shaped, 3/8-mile oval. … Lanigan, the all-time winningest World of Outlaws driver, is making his second appearance in a self-designed Club 29 Race Car; he won his debut last Sunday at North Florida Speedway in Lake City, Fla. … Richards, the series’ defending champion, will be sidelined indefinitely by an undisclosed medical issue; Brandon Sheppard of New Berlin, Ill., is once again subbing for Richards in the Rocket house car and will follow the World of Outlaws to begin the season. … Chase Junghans of Manhattan, Kan., Boom Briggs of Bear Lake, Pa., and Frank Heckenast Jr. of Orland Park, Ill., are among drivers with early-season intentions to chase WoO Rookie of the Year honors. … Michael Lake, 12, of Uniontown, Pa., will pilot the Warrior house car this weekend. ... Hometown driver Ivedent Lloyd Jr. of Ocala, Fla., was a late arrival. ... Following three events at Bubba Raceway Park, WoO competitors move to Volusia Speedway Park in Barberville, Fla., for three more events apart of the 43rd annual DIRTcar Nationals presented by Summit Racing Equipment. DirtonDirt.com will offer live pay-per-view video coverage of each DIRTcar Nationals event. Click here for more broadcast information or follow this link to purchase a pay-per-view package.