Rallying back into lead, Moyer wins at East Bay 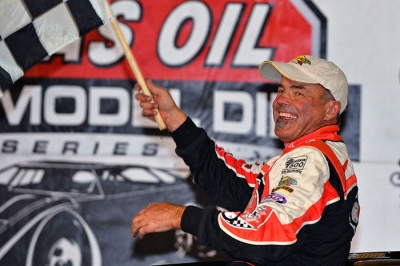 Blankenship blew past Moyer on the eighth lap and looked like he’d run away from the field. But Moyer gathered himself after a pair of mid-race cautions, turned up the heat on Blankenship and took over for good with seven laps remaining in the 50-lap feature.

The winner earned $10,000 in the first Lucas Oil Series points race of the week while Blankenship faded, finishing a half-straightaway back at the finish. Moyer, who also captured Tuesday’s main event, collected multiple Winternationals victories for the fifth time in his career.

“We had a lot of fun there,” said Moyer, who saw Blankenship lead by as much as a straightaway and build cushions of four lapped cars while dominating before the halfway point.

“He did a good job. There’s so many good cars here, there isn’t much laying back. When he got back by me there and I was just trying to settle in, I knew it was early there and trying to do a little bit of a tire management thing just a little bit,” Moyer said.

“Then I’m thinking to myself, I know how hard John drives. When the green flags out, he runs as hard as he can run. There’s no saving much. I just had to pick my game up and do the same thing.”

Blankenship at first edged away after a lap-25 restart, but Moyer came alive and began threatening him by lap 35. When Blankenship elected to take the high side around a lapped on lap 38, Moyer slipped ahead in the low groove.

Blankenship rushed back to reclaim the lead on lap 39, but he continually slid up in the corners, allowing Moyer to nose underneath and eventually slip past to take command on lap 44. He cruised the rest of the way.

Fifth-starting Scott Bloomquist of Mooresburg, Tenn., was third with Don O’Neal of Martinsville, Ind., advanced four spots to finish fourth. Gregg Satterlee of Indiana, Pa., ran third early in the race but slipped back to finish fifth for his best East Bay performance.

Moyer lost a tight one to Erb on Thursday, but he made sure to hang on in the final laps of Friday’s main event.

“I don’t know how much room I had, but I kind of seen (Blankenship’s) car was skating up and wouldn’t run the bottom as well as mine, so I just didn’t really mess up and stayed in that little brown (streak) down there with my left-side (tires), and I felt like I was OK, at least on this end,” the winner said.

Blankenship said his car was good, but Moyer’s was just a little better, particularly at crunch time.

“I think he got under me once on lap 40 or so. I figured as long as we stayed in some lapped traffic, I'd have a pretty good shot at it,” Blankenship said. “When I saw that caution, I kind of knew I was a sitting duck. He’s so smooth he probably had brand new tires on, basically, and my stuff’s burned up a little bit. I think we just got beat on that.

“I knew he was probably coming. I thought I heard him a couple of times down there, and he was just staying so straight and taking such good care of his stuff. It’s hard to run with him when he’s got that good of a car.”

The race was slowed by four cautions, including a first-lap scramble requiring a complete restart. Just after the green flew for the first time, the melee left a pile of cars at the top of the backstretch including Billy Moyer Jr., Davey Johnson, Brian Shirley, Kevin Weaver, Chad Hollenbeck, Devin Moran among others. Moyer pitted to change a flat tire while Johnson retired.

The other yellows flew on the 25th lap when Brian Shirley slowed atop turn three, then again on the lap-25 restart when Moyer Jr. and Bobby Pierce stalled. The last caution appeared on lap 41 when Jared Landers was facing the wrong way on the backstretch.

Notes: Moyer’s Longhorn Chassis is powered by a Clements Automotive Engine and sponsored by Banner Valley Hauling, Henderson Motorsports, Karl Performance, Watters Autoland, New Vision Graphics, Sunoco and Red Line Oil. … Moyer also had years of multiple Winternationals victories in 1986, ’90, ’91 and 2008, when he won a career-best three races. … Fourteen of 26 starters finished on the lead lap and 21 were running at the finish.

Brian Shirley led all the way from outside the front row to win the consy over fellow Lucas Oil rookie candidate Randy Weaver. Eric Jacobsen got the third and final transfer position. A lap-three yellow appeared when Chad Stapleton got sideways between turns three and four and Andy Bond tagged him.

Billy Moyer Jr. outran Davey Johnson for a victory in the first consy while Kevin Weaver got the final transfer spot in third. Adam Bowman spun between turns three and four on the third lap to draw a caution. Another yellow appeared on lap eight when O'Hara and Bowman tangled between turns one and two.

Earl Pearson Jr. outran fellow front-row starter Don O'Neal for a victory in the caution-free final heat. The top two broke away from the field while sixth-starting Ricky Weiss finished a distant third, just ahead of Thursday's feature winner Dennis Erb Jr. Erb started third but slipped back to fifth early and recoverd to get the final transfer spot. Brian Shirley was fifth.

Edging away from an early side-by-side duel with polesitter Steve Francis, John Blankenship led all the way in the third heat to earn a front-row starting spot for the feature. xxxx. Three yellow flags slowed the action. A lap-two caution appeared for John Mollick, who got slightly out of shape on the backstretch, then tangled with Eric Jacobsen in turn four. Another yellow came out on the fourth lap for Dennis Franklin's flat tire and Chad Stapleton spun in turn four on the eighth lap.

Gregg Sattterlee won the second heat from outside the front row, turning back a late challenge from third-starting Jimmy Owens as the top six ran in a tight pack most of the caution-free distance. Kenny Pettyjohn was third and Jared Landers fourth as polesitter Billy Moyer Jr. slipped out of a transfer spot with three laps remaining. Owens kept the heat on Satterlee the second half of the race but couldn't make the pass as the lead pack featured close quarters racing throughout the prelim.

Turning back Scott Bloomquist's first-lap crossover move, polesitter Billy Moyer captured the first heat to earn the pole position for the second straight night. Bloomquist hung with Moyer but settled for second while Eddie Carrier Jr was third and sixth-starting Booper Bare nabbed the last transfer spot. Davey Johnson was fifth. Two cautions slowed the action. A lap-three caution appeared when Jason Papich spun in turn four after a few cars checked up in front of him, then another yellow appeared on the seventh lap for Adam Bowman's spin, also in turn four.

Francis tripped the clock at 14.034 seconds on the third-mile oval and will be among heat race polesitters in Friday’s prelims for the $10,000-to-win points race.

Other heat race polesitters: Billy Moyer of Batesville, Ark., and his son Billy Moyer Jr. along with Don O’Neal of Martinsville, Ind.

Four cars apiece will transfer from each of four 10-lap heat races while a pair of 12-lap consolation races will transfer two cars apiece. The DirtonDirt.com Strawberry Dash, 50-lap main event and a non-qualifiers’ race will compete the night’s program.