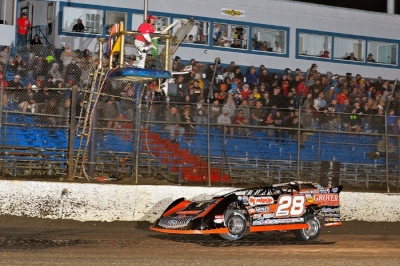 After all, the 42-year-old driver from Salt Rock, W.Va. — nicknamed the Salt Rock Express — changed his car’s graphics scheme during the off-season to include an onrushing locomotive on the hood of his No. 28. | Complete Speedweeks coverage

And that locomotive surged down the track faster than anyone all night long at the third-mile oval, lowering the track record, dominating a heat race and leading all 25 laps of the main event for his first career victory at the Clay by the Bay.

While it was a non-points race on the Lucas Oil Series, Carrier pocketed $5,000 and has high hopes his new car will carry him to more success during the Winternationals stretch that includes five more races through Saturday night.

“After you come out and break the track record and you win the heat, you about have to win the feature,” Carrier said in victory lane. “It don’t work out like that all the time, but everything just fell into place. Hopefully we can carry this on through the week.

Starting outside the front row, Carrier notched his fifth career Lucas Oil Series victory and first since last April in holding a comfortable lead throughout the feature.

Polesitter Devin Moran of Dresden, Ohio, finished nearly a half-straightaway behind in second while a pair of Illinois drivers made late charges to finish third and fourth. Brandon Sheppard of New Berlin, Ill., rallied from eighth and Brian Shirley of Chatham, Ill., rallied from 14th while Billy Moyer Jr. of Batesville, Ark., lost two spots late to settle for fifth.

Carrier was anxious to unveil his new primary car in last week’s Lucas Oil Series action at Golden Isles Speedway near Brunswick, Ga., but engine problems knocked the car out of commission. While he ended the weekend at Golden Isles with a strong runner-up finish in his backup car, he and his father Eddie Sr., crew chief with Grover Motorsports, spent an off-day getting the primary car powered up again.

“We had to do a little work, like I said, get the motor back in this new car because we broke it out at Golden Isles and lost a motor on the first day. I knew right then this car was good,” Carrier said. “We worked hard over the winter to get where we need to be. I’d just like to thank (car owner) Carl Grover for sticking behind us and letting us come out here and do what we love to do.”

The car drove "like it was on a rail,” Carrier added. “I believe any monkey could’ve drove it tonight.”

Moran nearly lost the second spot to Billy Moyer of Batesville, Ark. — the father of the fifth-place finisher — after a lap-13 restart, but he couldn’t keep up with Carrier.

“I’ve always loved this place. Coming out here and running with everybody,” said the 19-year-old Moran, who posted his best East Bay run at a track where his Hall of Fame father Donnie has two victories. The winning Carrier “did an awesome job,” Moran said. “His stuff was definitely hooked up, so we’ll have to get a little better for tomorrow.”

The feature was slowed by four cautions, two for multicar incidents. On the second lap, Dennis Franklin got into Jason Hughes in turn one, spinning both machines. On a lap-19 restart, Kenny Pettyjohn, Bobby Pierce, Davey Johnson and Mike Benedum were among drivers involved in a turn-two skirmish.

Other yellow flags appeared for slowing cars (Justin Rattliff on lap 13 and Mark Whitener on lap 19).

Notes: Carrier’s Rocket Chassis has a Grover Motorsports powerplant and sponsorship from E.I.  Engines, Hess, Stewart & Campbell PLLC, Blue Ridge Machinery and Tools, Cox Wrecker Service and Hoosier Racing Tire. … Carrier’s previous Lucas Oil Series victory came last April at West Virginia Motor Speedway in Mineral Wells. … Sixteen of 26 starters completed 25 laps. … Gregg Satterlee of Indiana, Pa., rallied from 19th-to-sixth in his first career East Bay feature. … Billy Moyer Sr. ran as high as third officially but faded to seventh at the finish. … Lucas Oil Series marketing director Wayne Castleberry was struck in the head by a rock outside turn two during the first consolation race; he received medical attention at the track and cleaned up at his hotel room but returned sporting a bruise at the top of his left cheek.

There was nearly a half-hour delay between consolation races after Lucas Oil Series marketing director Wayne Castleberry was treated by medical personnel after being struck by a rock outside turn two; he was shaken up but expected to be OK. ... Brian Shirley made a last-lap charge in third heat to overcome a poor qualifying effort, nabbing the fourth and final transfer spot in a near-photo finish. He was disappointed crew members didn’t tell him to run the low groove in time trials, and his “Hail Mary” run on the high side dug a hole for him. “We’ve got a good car … so we’ll be all right,” Shirley said. … Vic Coffey broke a motor and is apparently done for the night. … Dan Stone scratched from the fourth heat when he got a flat tire heading for the lineup. … Jimmy Owens, who spun battling for the lead in the first heat, has elected to take the fast-qualifier provisional. ... Bobby Pierce twice changed tires before heading for the lineup for the first consy. ... Chad Stapleton broke an oil cooler in his heat race; he plans to run his consolation race.

Polesitter Billy Moyer cruised to an easy victory, builting a straightaway advantage at halfway in earning a second-row spot in the feature. Fourth-starting Brandon Sheppard, getting a front row spot when Dan Stone scratched, shook off some early challenges to finish an easy second. Mark Whitener was third, holding off final transferree Eric Jacobsen. Mike Benedum was further back in fifth.

New track-record holder Eddie Carrier Jr. led all the way in the third heat, easing away from fellow front-row starter Jared Landers for the victory. Landers was a half-straight behind at halfway and struggled to keep up, but he faced no challenges for the second spot. It was exciting behind him, though. Sixth-starting Ricky Weiss was a distant third, but things were shuffled when he nearly lost control exiting turn four heading for the white flag. Weiss recovered to hang on but Brian Shirley, then running seventh, came alive to get around Dennis Franklin, and then barely slipped around Jason Hughes on the final lap to nip him at the checkers.

Ray Cook outjumped polesitter Davey Johnson and cruised to a 10-lap victory in the caution-free second heat. Johnson couldn't keep up and had his hands full with Dennis Erb Jr. most of the race as drivers stuck with the low groove at the third-mile oval. Erb settled for third, slipping back a bit at midway, while Chad Hollenbeck was further back in fourth for the final transfer spot. Vic Coffey was a distant fifth. Coffey's car showed smoke late in the race.

Devin Moran, surviving a side-by-side battle with reigning series champ Jimmy Owens that sent the race-long leader around in turn four on the sixth lap, won the first heat from the third starting spot. Moran slid under Owens entering turn three and contact in turn four sent Owens spinning; he had to restart on the tail. Moran cruised the final four laps while polesitter Billy Moyer held on for second ahead of Kenny Pettyjohn. First-time East Bay visitor John Mollick got the final transfer spot.

Carrier tripped the clock at 13.971 seconds at the third-mile oval and will start on the pole of the third of four heats. The former record was 14.022 seconds set by Chris Wall of Springfield, La., on Feb. 6, 2010.

Besides Carrier, other heat race polesitters: Davey Johnson of Latrobe, Pa. and the father-and-son due of Billy Moyer and Billy Moyer Jr. of Batesville, Ark.

It’s a beautiful evening with temperatures in the upper 60s. … Four-time series champion Earl Pearson Jr. of Jacksonville, Fla., enters the week’s action leading the series points for the first time since 2009, but he’s among a handful of drivers sitting out the non-points event. Friday and Saturday’s races are series points events. … The week’s schedule calls for the drivers’ meeting at 5:15 p.m., hot laps at 6 p.m. and racing at 7. … Among drivers with cars in the pits who aren’t racing include two-time series champion Scott Bloomquist, Earl Pearson Jr., Don O’Neal, Steve Francis, Randy Weaver and Brady Smith. ... Smith isn't expected to compete at East Bay with plans to head to Bubba Raceway Park in Ocala, Fla., for weekend World of Outlaws action… East Bay averaged 39 cars last season with a high of 44 and a low of 33. … The week’s first four races are non-points; series point races are Friday and Saturday. … Lucas Oil points started last week at Golden Isles Speedway’s Georgia Boot Super Bowl of Racing. … Billy Moyer of Batesville, Ark., is the all-time winningest Winternationals driver with 21 victories. He’s followed by Don O’Neal (14), Steve Francis (10), Jimmy Mars (6) and Scott Bloomquist (6). ... Because it's not a points event, no series provisionals are available. The 24 slots will be filled through racing with the last row set by the fast qualifier not already in the race and the DirtonDirt.com Strawberry Dash winner. ... Thursday's event will be live on MavTV at 9:30 p.m. EST; xsan.tv is providing live pay-per-view of the other events. ... First-time East Bay racers: Mike Stadel, John Mollick, Gregg Satterlee, Adam Bowman and Dustin Mitchell. ... Chad White of Coloma, Mich., was also set to make his East Bay debut but scratched from Monday's action with engine problems. ... Booper Bare and Dustin Mitchell are piloting J.C. Clary-owned cars. ... Billy Moyer Jr. broke an engine in Sunday's practice. ... Dennis Erb Jr., the only two-time winner last year, is running a Rayburn Race Car this season; Justin Rattliff and Andy Bond are also Rayburn entrants at a track where Rayburn cars fared well over Winternationals history. ... Dennis Franklin, a frequent Crate Late Model competitor at East Bay, is making his first Super Late Model start at the third-mile oval in more than a dozen years. ... Don Young of Hopkinsville, Ky., has made a single appearance at East Bay in a Crate Late Model and makes his Super Late Model debut at the track; he had engine problems in qualifying. … Chad Stapleton’s car showed smoke on his second time trial lap.