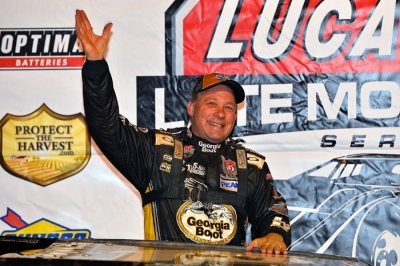 The polesitting driver from Ashland, Ky., led all 50 laps in the finale of the Lucas Oil Late Model Dirt Series weekend, fighting off challenges from Brandon Sheppard and Eddie Carrier Jr. for a $10,000 victory, his 14th career series victory and first since last August.

Sheppard, of New Berlin, Ill., turned up the heat on Francis on lap 30, but couldn’t find a way past. Then Carrier, a fellow Kentucky native who races out of Salt Rock, W.Va., threw everything he could at Francis after the final restart on lap 37 before the winner pulled away to win by a dozen lengths at the finish.

While Carrier grabbed second, Sheppard two spots late in the race when he got briefly sideways in turn four and took a muddy detour through the infield. That allowed Earl Pearson Jr. of Jacksonville, Fla., to sneak past for his third consecutive third-place finish of the weekend, moving him into the series points lead. Weekend newcomer Scott Bloomquist of Mooresburg, Tenn., rallied from his 13th starting spot to finish fourth and Sheppard was fifth.

Other contenders fell by the wayside. Fourth-starting Billy Moyer Jr. of Batesville, Ark., got too high on the first lap and slipped back. Gregg Satterlee of Rochester Mills, Pa., was running fifth on the lap-six restart, but he lost power and his crew pushed his No. 22 to the pits. Dennis Erb Jr. of Carpentersville, Ill., started 11th and ran as high as fourth, but his race ended when he spun into the infield inside turn two on a lap-36 restart.

The runner-up Carrier, who scored his best Lucas Oil Series finish since a victory last April, said his car was quick on the short runs, so he gave it his best shot when the final green flew with 13 laps remaining.

“On that last restart, I kind of got my tires cooled back down, and I was pretty good for about three laps, and he started walking away from me,” Carrier said. “I thought I’d give it a shot down here on the top on that one restart and see if I could get by him and maybe make it a little bit harder on him to win the race.

“But Stevie was the best car tonight. I was just hoping I could get by him and hold him up a little bit and maybe hold him off. The way the weekend started, we’ll take this second-place and build on it and get to work and get ready for next week.”

Francis felt the pressure from Sheppard and Carrier in the second half of the race.

“We got a little tight there through the middle-late part of the race, and I had to start driving a little more crooked than I wanted,” he said. "I tried to protect the bottom and I could just tell we weren’t going to be better there. We just needed to let our car kind of run out down the straightaway.”

The success was in part because of testing the team did at Golden Isles, along with experimenting with changes by chassis builder Barry Wright last fall.

“We kind of got away from what we tested with (at Golden Isles), and we kind of put that whole program back on the car for tonight,” Francis said.

“This is a lot of the things we learned from those cars (last fall). We had front wheels cut off and motors moved and batteries moved and rear ends moved. We went through a whole lot of different stuff and it’s been a little bit of a learning process, but all the guys have really got together and put a lot of effort into this. … I’m really excited to get a win this early in the year.”

Six cautions slowed the action, the most serious after a lap-six restart when Jared Landers spun between turn one and two, triggering a multi-car accident that involved Tim McCreadie, Don O’Neal, John Blankenship and Brady Smith, among others.

Other yellows appeared for single-car incidents for Jonathan Davenport (slowed on second lap), Dennis Franklin (spun alone on the sixth lap, then slowed on lap 36), John Blankenship (stalled on lap 19) and Erb.

Lucas Oil competitors head to East Bay Raceway Park in Gibsonton, Fla., for a Sunday practice session before the 38th annual Winternationals from Feb. 10-15 at the third-mile oval near Tampa.

Notes: Francis drives a Barry Wright Race Car powered by a Clements Automotive Engine and sponsored by Georgia Boot, Peak Antifreeze & Motor Oil and Cometic Gaskets. … Francis last won on the series Aug. 24, 2013, at Lawrenceburg (Ind.) Speedway. … Fan Dixie Franklin earned $515 and a pair of boots from title sponsor Georgia Boot because she was linked with Francis in a special promotion. ... Sixteen of 24 starters complete 50 laps. … Earl Pearson Jr. earned $2,000 from Hot Rod Trackers as the weekend's top performer. ... Golden Isles promoter Darryl Courson announced before the feature that 2015’s Super Bowl of Racing will be made up of two $10,000-to-win Lucas Oil Late Model Dirt Series events on Feb. 6-7; practice will be Feb. 5. … There was a 10-minute delay in the evening's program when a family discovered a 4-year-old boy was missing; racing was halted until he was found. Another child went missing later in the pits but was also quickly discovered.

Polesitter Billy Moyer Jr. raced to victory in a wild final heat race, taking the checkers ahead of Gregg Satterlee. Outside front-row starter Randy Weaver was third while tail-starting Mike Stadel avoided a few messes for the fourth and final transfer spot, earning his first Lucas Oil feature start. Ricky Weiss held the second spot early in the race, but he got too high and brushed the backstretch wall before the midway point, then got completely into the fence in the corner and pulled out with heavy right-front damage. The first lap was marred by a melee in turn two. Vic Coffey hit the guardrail and came back down the track and collied with Jason Hughes. Albert Cosnahan was also caught up in the mess while Mike Stadel spun to avoid it. Coffey's car was towed away while Cosnahan pulled to the pits and Hughes soldiered on with right-side sheetmetal damage.

Outside front-row starter Eddie Carrier Jr., denied an early chance at the lead when polesitter Chris Madden slid in front of him on the first lap, inherited the lead when Madden slapped the turn-four guardrail on the third lap and fought off Jonathan Davenport for a 10-lap victory. Davenport was hot on Carrier's heels but settled for second as they pulled away from the rest of the field. Ray Cook was third while Madden, who wasn't able to recover from his early miscue, for the fourth and final transfer spot.

Brandon Sheppard zipped around polesitter Dennis Franklin in turn one on the first lap, then survived jumping the cushion a half-lap later and finally pulled away for an easy victory. Franklin chased him home in a comfortable second while Dennis Erb Jr. was third ahead of Don O'Neal, who challenged up front early before dropping back. Chad Hollenbeck tagged the guardrail on the fourth lap and retired without a caution.

Steve Francis won a two-car breakaway with fellow front-row starter Earl Pearson Jr. to capture the pole for Saturday's main event. Francis took the preferred line into turn one on the first lap and Pearson could never recover. Pearson finished 10 lengths back in second with Jared Landers a distance third. Scott Bloomquist got the fourth and final transfer spot after Tim McCreadie slid high in turn two before the halfway point, costing him a position. The race ran caution-free.

Madden clicked in at 15.020 seconds at the 4/10-mile oval and will start on the pole of the first of four heat races. Other heat race polesitters: Earl Pearson Jr. of Jacksonville, Fla.; Dennis Franklin of Gaffney, S.C.; and Billy Moyer Jr. of Batesville, Ark.

The top four finishers from each heat race will transfer to the main event along with three cars apiece from each of two consolation races. The 50-lap feature event paying $10,000-to-win for Lucas Oil Series competitors.

Madden and Jonathan Davenport of Blairsville, Ga., grabbed victories in Friday’s doubleheader after Thursday’s racing at the 4/10-mile oval was postponed by rain.

Earl Pearson Jr. is the only driver with multiple top-five finishes after Friday's doubleheader. ... Two-time Lucas Oil Series champ Scott Bloomquist was Saturday's lone new entrant; he jumped the turn-one cushion on his second time-trial lap but kept his car out of the fence. ... Casey Barrow's weekend is over after having engine problems. … Jason Fitzgerald slowed during time trials and never got an official time. … With Friday evening’s event the first points race of the season, Chris Madden’s car will carry the day-glo orange rear spoiler signifying him as the series points leader in a promotion sponsored by Keyser Mfg. … Title sponsor Georgia Boot is registering fans to win cold hard cash in Saturday’s finale. Registered fans will be paired up with the feature’s 24 starters and the winner will pick up $515 and a pair of boots. … Lucas Oil regulars will head to East Bay Raceway Park for Sunday's practice preceding the Feb. 10-15 Winternationals. ... A few may stop and race at North Florida Speedway in Lake City, which is hosting a $5,000-to-win UMP DIRTcar event. ... Along with Crate Late Models (sanctioned by the NeSmith Dirt Late Model Series), hobby stocks and E-mods are slated on the night’s racing card; 36 Crate Late Models are entered.