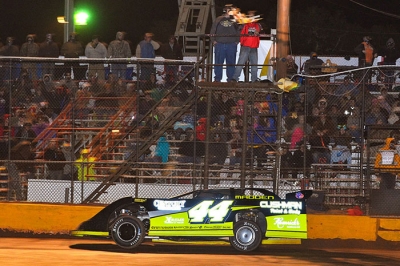 BRUNSWICK, Ga. (Feb. 7) — When Chris Madden sensed that his right-rear tire was deflating with 10 laps remaining in Friday’s nightcap at Golden Isles Speedway, the Gray Court, S.C., figured his chances of winning the Georgia Boot Super Bowl of Racing feature were over. | Complete Speedweeks coverage

But a tire that survived just long enough — along with an unexpected boost on the final restart — allowed the polesitting Madden to hang on to win the season’s first points race on the Lucas Oil Late Model Dirt Series.

“I never have won one like that,” said Madden, who earned $10,000 for his sixth career Lucas Oil Series victory. “I’ve come up short a bunch of times, but never won one.”

Madden’s car was clearly laboring exiting the corners over the final 10 laps, and a late caution set up a two-lap shootout with Don O’Neal of Martinsville, Ind., looming in second place.

But getting a little breathing room when O’Neal was surprised on the final restart, Madden’s No. 44 with the flashy new yellow graphics won the race to the checkers at the high-speed 4/10-mile oval in southeast Georgia.

“I didn’t figure we’d ever make it, but we did,” a relieved Madden said in victory lane after officially leading 50 laps.

O’Neal, who ran side-by-side with Madden for several laps early without finding a way past, settled for second in a race he believed he’d have won with one more circuit. “I don’t think he had another lap in it,” O’Neal said with a laugh.

Madden outjumped Pearson at the outset and, after two early cautions, the third-starting O’Neal moved in to challenge. With Madden in the outside groove and O’Neal staying down low, they ran wheel-to-wheel several laps before Madden edged away by the 10th lap.

Competitors began to filter into the lower groove with Madden firmly in control through the race’s middle stages. But when Madden caught up with the slower car of Ray Cook, he couldn’t find a way past, and signs of tire problems began to appear in the final 10 laps.

When a lap-48 caution reset the field, O’Neal was aware that Madden would be vulnerable with two laps remaining. But because his one-way radio communication from series officials wasn’t working, the last green flag caught him off guard.

“My Raceceiver didn’t work, and I was paying attention, and I kept thinking, 'Man, he’s got a tire going down.' And I was looking at that and I didn’t even look at that (green) light … and I seen that, and I was like 'Oh man!' I pretty much blew any shot we had,” O’Neal said. “I thought, 'Man, I’ve got him, that tire’s going flat.' But he hung in there and made it.”

The race was slowed by a three cautions, the most serious for Devin Moran’s turn-four spin on the second lap that collected Jonathan Davenport, Friday afternoon’s race winner who set fast time for the evening event but was hampered by a flat tire in his heat race.

The 50-lapper's caution appeared on the second lap when Billy Moyer pulled up with a flat right-rear tire and the last yellow on lap 49 when Tim McCreadie stopped atop turn four.

Lucas Oil’s action at the Super Bowl of Racing concludes Saturday with another $10,000-to-win event. Hot laps begin at 5 p.m.

Continuing a successful day, Billy Moyer Jr. got the jump on fellow front-row starter John Blankenship and cruised to victory in the final heat. He had nearly a full straightaway lead by halfway while Blankenship had his hands full with sixth-starting Dennis Erb Jr. late in the race. But Blankenship escaped when Steve Francis, who lost third to Erb earlier in the race, rallied back to steal the spot. Francis slid under Erb entering turn three in the final laps and both drivers got sideways with Erb nearly losing control. Secondary contact from Francis helped straighten Erb's car, and they continued the side-by-side battle with Francis eventually regaining the position. Erb showed a little displeasure with Francis on the cool-down lap. Brian Shirley finished a distant fifth in the caution-free race.

Becoming the first runner to outran Jonathan Davenport this weekend, track favorite Earl Pearson Jr. cruised to victory in the third 10-lap heat. His fellow Longhorn driver Davenport held the second spot until lap nine when he pulled up above turn two with a flat right-rear tire, forcing him to the pits. Kenny Pettyjohn took advantage to finish second with Eddie Carrier Jr. and Steve Shaver getting the other transfer spots. Jason Riggs lost the fifth spot on the eighth lap when he spun in turn one; he continued without drawing a yellow. Besides the caution for Davenport, a lap-three yellow appeared when fourth-starting Dennis Franklin spun inside turn four.

Don O'Neal survived first-lap contact with Jimmy Owens in turn three and pulled away for an easy heat race victory. Owens ran into trouble midway through the race when he slammed the turn-three guardrail, but he was able to keep going and finished third behind Devin Moran. Home-state driver Russell Brown Jr. nabbed the final transfer spot. Brandon Sheppard was running second when he rolled a left-rear tire off the rim; he pitted in the infield and returned to finish fifth after the late-race caution.

Looking for redemption after a subpar afternoon outing, Chris Madden survived an onslaught from Gregg Satterlee and Vic Coffey on the last lap to win the first 10-lap heat. Madden had a nice margin most of the way, but Satterlee turned up the heat in the high groove and Coffey charged down low as they were all over Madden in the final laps. Madden went high exiting turn four on the last lap and held on with Satterlee, Vic Coffey and Tim McCreadie transferring to the main event from the caution-free prelim.

Davenport tripped the clock at 15.041 seconds and will start on the pole of the first of four heat races. The other heat race polesitters: Chris Madden of Gray Court, S.C.; three-time and defending series champion Jimmy Owens of Newport, Tenn.; and Billy Moyer Jr. of Batesville, Ark.

Davenport captured Friday afternoon’s 25-lap opener, and event postponed by rain on Thursday night. Davenport, who lowered the track record Friday morning, led all the way for a $5,000 victory in the non-points event.

Eddie Carrier Jr. went to a backup car after burning a piston in the afternoon prelims. … Several other teams had work to do on damaged cars after the afternoon session including the cars of Mike Stadel, Ricky Weiss and Dennis Erb Jr. … Casey Barrow’s car showed heavy smoke during his time trial laps. … The NeSmith Chevrolet Series Crate Late Models are also in action with a full program with a $2,500-to-win feature. … Limited Late Model and super street divisions are also in action with hot laps and feature events. … The weekend’s Lucas Oil action is scheduled to conclude Saturday with another $10,000-to-win feature; hot laps start at 5 p.m.