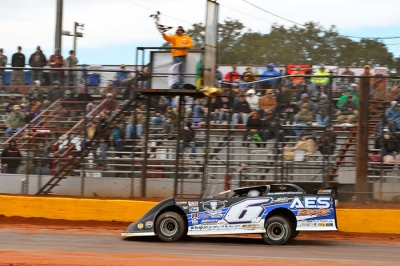 BRUNSWICK, Ga. (Feb. 7) — After adding new drivers to the stable in the off-season, Longhorn Chassis is suddenly riding high.

The polesitting Davenport, who lowered the track record in time trials as the first driver under 15 seconds at the 4/10-mile oval, kept all challengers at bay in the non-points feature event while grabbing a $5,000 victory.

“We’ve worked out tails off this year and this is one bad-ass piece. I could drive it anywhere I wanted to. It was a real pleasure to drive,” Davenport said in victory lane. “I just can’t say enough, how good we’ve come out of the box here. We’ve just begun. I think we’re going to get better and better as the year goes.”

Kevin Rumley, who redesigned the Longhorn chassis a year ago and supports Davenport’s team with his father Lee Roy and AES Racing of Mount Airy, N.C., joined Davenport in victory lane.

The lone interloper among the top four was Brandon Sheppard of New Berlin, Ill., substituting for the ailing Josh Richards in the Rocket Chassis house. He crashed the Longhorn party after a mid-race restart to grab the second spot and finished a half-straightaway behind Davenport. Pearson and Moyer were followed to the checkers by the new Rocket Chassis of Tim McCreadie of Watertown, N.Y.

Davenport got the jump at the outset with Sheppard edging past Moyer, but Sheppard was shuffled back to fourth after a lap-seven yellow as Davenport led fellow Longhorn drivers Moyer and Pearson for a few laps.

With Davenport edging comfortably away again after a lap-11 restart, Sheppard found his way past Moyer and Pearson to grab the second spot, but he couldn’t keep up with Davenport while Moyer and Pearson battled side-by-side late in the race. The seventh-starting McCreadie nearly stole a spot from Moyer late before settling for fifth.

“I just can’t say enough about these Longhorn Chassis,” Davenport said, thanking the Rumleys,  Steve Cooke of AES and other team supporters that connected late in 2013. He was gratified “that we can put this deal together and be this good.”

Sheppard made a solid run, but he couldn’t keep up with Davenport in the second half of the race.

“His car was good. We just didn’t have what we needed to win. We’re going to go back and work on it and hopefully get us one in this night race,” Sheppard said. “We were pretty good. I was kind of sticking down on that bottom pretty good, and if we would’ve moved up on the track there, I think we could’ve rolled around up there. But I passed them other guys on the bottom there, so I was trying to see what all I had down there. Like I said, we’re pretty happy with it so far, and hopefully we can come back and get another good one.”

Four cautions slowed the action, the most serious on the 11th lap when Gregg Satterlee, Vic Coffey and Brian Shirley were among drivers getting tangled up inside turn two. All were able to continue.

The first yellow flag appeared on the seventh lap when Jason Fitzgerald got into the fence alone exiting turn two, and Ray Cook slowed on the backstretch on lap 17. Debris slowed the race a final time on lap 20.

Friday’s action continues in the evening with the regularly scheduled $10,000-to-win event, the first Lucas Oil Series points event of the season. The weekend finale is a $10,000-to-win feature scheduled for Saturday evening.

Notes: Davenport’s Longhorn Chassis has a Rumley powerplant and sponsorship from AES Racing, CV Products. … Davenport won his previous trip to Golden Isles in the track’s lone Speedweeks event in 2012. … Davenport’s previous victory came Oct. 25 at Smoky Mountain Speedway in Maryville, Tenn. … All eighteen drivers running at the finish completed 25 laps. … While he was a dropout in the Lucas Oil feature, Ray Cook of Brasstown, N.C., won the NeSmith Dirt Late Model Series feature for crate-engine Late Models after Walker Arthur of Forest, Va., led most of the way.

Steve Shaver's high-side pass on the last lap denied Jared Landers a victory in the consolation race. He transferred to the main event along with Landers, Devin Moran and Dennis Erb Jr. Landers led virtually all the way after rubbing past polesitter Jason Papich on the first lap, but he had his hands full with a low-running Moran and a high-running Shaver in the final laps before settling for second. Jason Riggs was fifth, the first driver failing to transfer. A caution appeared on the second lap when Papich slid high in turn one after Landers went past, with Papich catching the fence and then collecting Jason Hughes, who also pulled pitside with right-side damage. A previous caution appeared when the first start was scrapped.

Chris Madden repelled a side-by-side challenge from Don O'Neal to grab a victory in the fourth heat. O'Neal dug hard in the low groove in turns one and two to nose ahead down the backstretch, but Madden turned up the wick and stayed in control, pulling back away for the victory. O'Neal finished second with Brian Shirley and Steve Francis third and fourth. Chad Hollenbeck got the fifth and final transfer spot. A lap-three yellow when Shirley (high) and Francis (into infield) went skittering out of control while battling for a transfer spot.

Withstanding a stiff midrace challenge from Jimmy Owens, polesitter Billy Moyer Jr. held on to lead all the way and earn a front-row starting spot in the main event. Owens finished 10 lengths back in second while Dennis Franklin was a distant third. Gregg Satterlee and Vic Coffey also transferred while Casey Barrow was the only other driving running at the finish. Owens chased Moyer for three laps before moving alongside on the frontstretch at the race's midpoint. But Moyer mashed the gas harder in the high groove and edged back ahead exiting turn two, then edged back away. The first start was called back, but when the frontrunners slowed on the backstretch, it triggered a mess. Franklin jumped hard on the brakes, and Dennis Erb Jr. got into the rear of Franklin's machine and spun. Kenny Pettyjohn came upon the mess and destroyed the left-front suspension of Erb's new car. Pettyjohn's car suffered heavy right-side damage and was towed away.

Polesitter Brandon Sheppard withstood challenges from outside front-row starter Tim McCreadie for an eight-lap victory in the second heat. The top four pulled away — Sheppard, McCreadie, John Blankenship and Brady Smith all in Rocket Chassis — with Sheppard edging away in the second half of the caution-free prelim. Blankenship pressured McCreadie but settled for third with Smith in fourth. Randy Weaver was a distant fifth for the final transfer spot after mixing it up with Jared Landers and Devin Moran throughout the race. Moran started outside the second row but got too high in turn two on the first lap, slipping back badly.

Fast qualifier Jonathan Davenport survived a wild first few laps and cruised to victory in the opening heat. He built a half-straightaway lead after just two laps and pulled away while Earl Pearson Jr., Ray Cook, Russell Brown Jr., and Jason Fitzgerald got the other transfer spots and the only cars completing eight laps. Things got crazy in turn three on the first lap when Earl Pearson Jr. mixed it up with Ray Cook and got nearly completely sideways before saving it. Davenport used that chance to sneak away while Cook settled in to run third all the way. The lone caution appeared on the first attempted start when Steve Shaver and Earl Pearson Jr. made contact exiting turn two, sending Shaver's machine spinning into the infield; Shaver retired. Eddie Carrier Jr.s car went up in smoke on the first lap and he rolled pitside.

Davenport, piloting a new Longhorn Chassis, posted a lap of 14.921 seconds and will start on the pole of Friday afternoon’s first heat race at the 4/10-mile oval. The previous track record, according to DirtonDirt.com records, was 15.049 set by Ronny Lee Hollingsworth in 2009.

The event is the first of 19 Super Late Model races during Georgia-Florida Speedweeks at five racetracks through Feb. 22. … Casey Barrow of Savannah, Ga., and Albert Cosnahan of Guyton, Ga., are the only drivers entered Friday morning who weren't entered Thursday evening; Barrow missed qualifying. … Earl Pearson Jr. won the last Lucas Oil Series event at Brunswick in 2008 with a last-lap pass of Scott Bloomquist. … Gregg Satterlee and Brady Smith are among drivers on hand who had planned on racing at Sylvania, Ga.’s Screven Motor Speedway, which cancelled it’s Feb. 7-8 Winter Freeze action earlier in the week because of weather. … Steve Shaver of Vienna, W.Va., who split with car owners Lee Roy and Kevin Rumley in the off-season, is piloting a Troy Baird-owned No. 5 Bloomquist Race Car at Golden Isles. … Jason Fitzgerald is piloting the GRT Race Cars house car and Ray Cook is making his debut in the Indiana-based MasterSbilt house car; both are also competing in lower divisions. ... Dennis Erb Jr. of Carpentersville is entered in a new C.J. Rayburn Race Car by Erb; he’s piloted Bloomquist Race Cars in recent seasons. … Other drivers beginning the 2014 season in a chassis different than they ran most of 2013 include Jonathan Davenport (now in a Longhorn), Tim McCreadie (Rocket), Brady Smith (Rocket), Don O'Neal (Barry Wright), Brian Shirley (Rocket), Billy Moyer Jr. (Longhorn) and Jared Landers (Rocket). … Three-time and defending series champion Jimmy Owens of Newport, Tenn., who brushed the turn-three guardrail on his second time trial lap but didn’t appear to suffer any damage. … Ricky Weiss and Mike Stadel were among drivers having problems in time trials; Weiss rolls to the pits and never took time while Stadel’s car was towed off after getting into the turn-three wall. … If the Friday evening forecast is threatening, the 5 p.m. start for hot laps might be moved earlier, officials said. … Forty-six drivers are entered on the NeSmith Dirt Late Model Series; they’ll also run a full program including time trials.