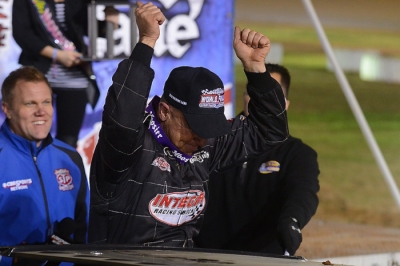 Hitting paydirt in his 21st career start at the 4/10-mile oval, Lanigan burst off the pole position to grab the lead at the start of the event and never looked back. He kept Scott Bloomquist of Mooresburg, Tenn., at bay late in the distance to register his long-awaited first-ever triumph at The Dirt Track and his tour-leading 12th win of the 2013 World of Outlaws Late Model Series campaign. | Sidebar | Video | Slideshow

But while Lanigan, 43, beat Bloomquist to the finish line by 0.596 of a second for a victory worth $12,150, his year-long reign as WoO Late Model champion came to an end. Josh Richards of Shinnston, W.Va., finished third to clinch his third career World of Outlaws title.

Don O’Neal of Martinsville, Ind., placed fourth and 2011 WoO champion Rick Eckert of York, Pa., was fifth in a race that was contested before a massive capacity crowd on a chilly fall evening.

Mathematically still alive in the battle for the WoO points crown entering the weekend (he trailed Richards by 106 points) but well aware that his chances of a comeback were slim, Lanigan focused primarily on breaking through for a checkered flag at The Dirt Track. He had little trouble achieving that goal after picking the number one starting spot in the redraw among heat winners.

Lanigan smoothly handled four restarts and a track surface that became bottom-dominant to record the 53rd WoO win of his career. It was his second consecutive victory on the tour – though this one came nearly two months after his score in the last event on Sept. 21 at Berlin Raceway in Marne, Mich.

“We got a new setup on this (Rocket) car and it’s just been unbelievable since Berlin,” said Lanigan, whose last two WoO wins sandwiched a $40,000 triumph in the Knoxville Late Model Nationals on Sept. 28 at Knoxville (Iowa) Raceway. “The car was great tonight. When we had clear track we could really pick up the pace.”

The only hindrance for Lanigan was slower traffic, which he handled carefully late in the race. Bloomquist and Richards drew close to the leader, but Lanigan didn’t make a mistake.

“We got caught up there in the lapped traffic and just kind of followed them around,” said Lanigan, who became just the second WoO to win a World Finals A-Main in the event’s seven-year history, joining Richards (2008). “I knew it was gonna be hard to pass anybody, but the car was great and we had to earn it (front row spot). That’s what it took.”

Bloomquist, 49, ultimately didn’t have the necessary speed to mount a serious bid to overtake Lanigan. He started third but grabbed second place from Richards on a lap-one restart and never relinquished the position.

“We had quite a stumble in our carburetor,” said Bloomquist, who has two career World Finals victories. “Coming off the corners you saw partial throttle – it just wouldn’t accelerate smooth and it was really messing up through the race.

“The car was good. We probably need to get a little bit stronger off the corner, but we had a good run tonight.”

Lanigan’s success allowed him to seize control of the second spot in the WoO points standings entering Saturday night’s season finale. He ended the night 36 points ahead of Zebulon, Ga.’s Shane Clanton, who ceded 32 points to Lanigan with a 16th-place finish.

Lanigan hopes to cap his season by duplicating the World Finals sweep accomplished for the first time last year by Jimmy Owens of Newport, Tenn., who has also won Saturday night’s World Finals finale in each of the past four years.

“We came down here to win both of ‘em,” said Lanigan. “We got one of ‘em and we’re gonna go for the other one tomorrow night.”

Richards, 25, failed to convert an outside-pole starting spot into his 10th win of the season, but his solid third-place finish brought him the big prize: the $100,000 WoO championship. With a 100-point lead on Lanigan at the end of the night, he is assured of winning the title even if he were to not start Saturday night’s main event.

“It feels good to wrap up the title,” said Richards, who becomes the first driver in the tour’s World Racing Group era (2004-present) to win three championships. “Now I’d like to end the year with a win. I think if we can tweak it tomorrow we can definitely have something.”

Eric Wells of Hazard, Ky., who finished 18th, clinched the 2013 WoO Rookie of the Year award.

Four caution flags were needed during the race, all for minor problems. Austin Hubbard of Seaford, Del., brought out cautions on lap one (turn-four spin) and lap 24 (slowed on homestretch); Eric Jacobsen of Sea Cliff Beach, Calif., stopped on the lap-24 restart; and Steve Shaver of Vienna, W.Va., stopped in turn two on lap 28.

Billy Moyer of Batesville, Ark., who was the fastest qualifier in both rounds of time trials on Thursday night, saw his evening end quickly with a grinding crash on the opening lap of the first heat. He slammed the turn-two wall with the left side of his car and was noticeably shaken up.

The 56-year-old Dirt Late Model Hall of Famer was able to climb out of his car and walk gingerly to the ambulance with help from a member of the safety crew. But with Moyer dazed and complaining of pain in his neck and left elbow and hand, he was taken to a local hospital for a check-up.

After undergoing a couple hours of tests at the hospital, Moyer was allowed to leave and was back at the track by feature time. He was diagnosed with a possible concussion but no other significant injuries. He does not plan to compete on Saturday night, however.

The 2013 World of Outlaws World Finals Presented conclude on Saturday night (Nov. 9) with another tripleheader featuring the WoO Late Model Series, the WoO Sprint Car Series and the Super DIRTcar Series for big-block Modifieds. Gates open at 3 p.m., hot laps are scheduled to start at 4 p.m. and racing is set to begin at 5 p.m.