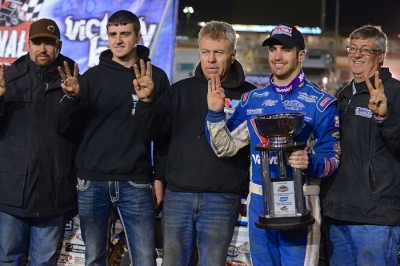 With the pressure of points racing removed after clinching his third career WoO title the previous night, Richards calmly roared off the pole position to lead the main event from start-to-finish in his father Mark’s Valvoline-sponsored Rocket Chassis house car. He turned back challenges from John Blankenship of Williamson, W.Va., and Rick Eckert of York, Pa., to register his 10th triumph of 2013 and the 49th of his career on the national tour.

Richards, 25, of Shinnston, W.Va., beat Eckert to the finish line by 0.941 of a second for a $12,650 payday that gave him two reasons to celebrate in front of the event’s standing-room-only crowd at the conclusion of the blockbuster program. | Slideshow | Video | Sidebar

“It feels awesome,” said Richards, who became the first driver to win three WoO championships since the WoO was restarted in 2004 under the World Racing Group banner. “It’s definitely icing on the cake (to win the A-Main).”

Sixteen-year-old Bobby Pierce of Oakwood, Ill., advanced from the 17th starting spot in his father Bob’s Pierce Race Car to finish third in his first career World Finals main event start. He cracked the top five on lap 25 and reached third place with a lap-44 pass of Blankenship.

Blankenship settled for a fourth-place finish — the same position from which he started — in a Rocket machine after running in second place for 29 of the race’s first 30 laps. Fifth was claimed by Dan Stone of Thompson, Pa., whose family-owned Rocket sustained heavy left-front damage after the checkered flag when he inadvertently hit Blankenship on the backstretch because he didn’t realize the race had ended.

Jimmy Owens of Newport, Tenn., finished sixth, bringing an end to his streak of capturing the Saturday-night World Finals main event in each of the last four years. He had high hopes of registering a fifth straight win after drawing the outside pole starting spot, but he was penalized one row by WoO officials for firing before Richards on the original start and then was forced high in turn one on the ensuing restart and fell to mid-pack.

Richards, who returned to the WoO tour fulltime this season after spending most of 2012 competing on the NASCAR Nationwide Series, secured the $100,000 championship prize on Friday night when a third-place finish left him with an insurmountable 100-point lead over defending champ Darrell Lanigan of Union, Ky. The early clinching put him in a nice spot for Saturday night’s finale.

“This is the most relaxed I’ve ever been here at Charlotte,” said Richards, who won a World Finals feature in 2008. “To be able to have the (points) cushion we had (entering the weekend) and wrap it up last night – compared to previous years when you’re (battling for the title) right down to the last lap (on Saturday) – was a relief. We were able to just go all-out for the win tonight.”

Richards had more than enough speed in his familiar blue No. 1 to handle six restarts between laps nine and 30 and threats early in the distance from Blankenship and later from Eckert.

“We were close last night,” said Richards, who chased Lanigan and Scott Bloomquist of Mooresburg, Tenn., across the finish line on Friday night. “We made some changes to the car today and it was so fun to drive. You could move around. My guys did a great job making adjustments.”

Richards ended the season with a commanding 150-point championship-winning margin over Lanigan, who retired with engine problems on lap nine and finished 25th but held on to place second in the WoO standings by just two points over eighth-place-finisher Shane Clanton of Zebulon, Ga. His 10 victories on the tour were a personal single-season high.

Eckert, 47, hustled forward from the 12th starting spot to take second place from Blankenship on a lap-30 restart. He raced within striking distance of Richards for the remainder of the race but had to be satisfied with his sixth runner-up finish of the 2013 WoO season.

“I feel like I was a little better than (Richards) in (turns) one and two and he was a little better than me through them holes in three and four,” said Eckert, who won the 2011 WoO championship when Richards slowed with a flat tire on the last lap of the World Finals finale. “If I could’ve ever stayed with him down the straightaway I might’ve been able to fill the gap to where he couldn’t come back across, but it’s tough do that with these cars because they get rocked up and it’s hard to see guys to the left of you.

“We’re happy with a second though. We started 12th and got up through there, so it’s a good way to end the year.”

Six caution flags slowed the event, including two for wall-banging incidents involving high-profile drivers. Bloomquist slapped the turn-four concrete on lap 20 while running seventh and Steve Francis of Ashland, Ky., hit the turn-one wall on lap 23 after tangling with Tyler Reddick of DuQuoin, Ill., while battling for fifth place.

Other caution flags were brought out by Lanigan, who slowed after losing power on lap nine; Bub McCool of Vicksburg, Miss., whose run in the top five ended on lap 12; Ryan Gustin of Marshalltown, Iowa, who slowed with a right-rear flat tire on lap 29; and Tim McCreadie of Watertown, N.Y., who was sent spinning into the infield in a turn-four jam-up on lap 30.

Heat winners were Owens, Richards, Reddick, Blankenship, McCool and Stone. The B-Mains were captured by Lanigan, Kenny Moreland of Waldorf, Md., and Sheppard.

The stars of the 2013 World of Outlaws will be honored — and share in nearly $400,000 in points-fund cash — during the tour’s annual awards banquet on Sunday night (Nov. 10) at the Great Wolf Lodge in Concord, N.C.

The 2014 WoO campaign is scheduled to kick off on Feb. 7-8 with the ‘Winter Freeze’ doubleheader at Screven Motor Speedway in Sylvania, Ga.

The 2014 World of Outlaws World Finals, meanwhile, will be held at The Dirt Track at Charlotte on Nov. 6-8.