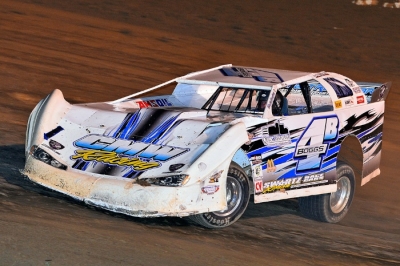 By the end of the night, the driver whose battles among the leaders drew cheers from the crowd you could hear over the engines was smiling and thinking about the third-place finish that paid $10,000 that will boost his racing program.

“I’m really tickled with it,” said Boggs, who started sixth and swapped the second spot with fellow Kentuckian Steve Francis in the second half of the race. In his 11th DTWC start, Boggs posted his best finish. His previous best was fifth in 2000 at West Virginia Motor Speedway in Mineral Wells.

Boggs might’ve run even better, he said, except an early battle with Billy Moyer at Portsmouth sent him into trouble in turn one, bending down his car’s nosepiece and hampering his steering, especially on restarts before the chassis leaned over on its right side.

“My car’s nose was in the dirt,” he said. “I couldn’t get it turned the way I wanted to, and I didn’t want to wreck nobody. I just wanted to have a good finish and that’s what we done.”

Boggs felt like he was making progress on winner Brandon Sheppard in the race’s late stages, but a lap-79 caution halted his potential rally and allowed Francis back by on the final restart. But Boggs didn’t let that get him down as many fans dropped by his pit to congratulate him afterwards.

“We were sitting there making a little money, and that’s the name of the game right now — make some money,” said Boggs, who has victories at seven racetracks in 2013. “We really needed to make a few bucks, we’ve got some motors down, you know. I just need to make a little money. I don’t have a lot of help doing this. I’ve had a $3,000 sponsor all year and that’s it. I do this on my own, so it’s pretty tough.”

Long-time DTWC fans ranking the best moves in the event’s history will have a find a spot for Brandon Sheppard’s high-side run on a lap-40 restart that launched him from fifth and eventually into the lead.

“I just saw a little bit of an opportunity there and took it, and it stuck,” the winner said nonchalantly.

But there was more to it than that for the 20-year-old driver from New Berlin, Ill., who was guest-starring in the Rocket Chassis house car.

“But it stuck up there good. I knew I was good on the cushion from last night, in the heat race and stuff. You never know. But we went up there and it stuck and it was amazing.”

Team owner Mark Richards had signaled for Sheppard to try the top on the lap-40 restart, and then encouraged him to get back to the bottom on a restart four laps later after Sheppard grabbed a lead he’d never give up.

"The cushion was just treacherous, and I seen him tell me to go to the top on that restart,” Sheppard said. “I think I stayed up there a little bit too long, because (Jackie) Boggs showed me a nose there. I don’t know. When they had that caution he told me to go back to the bottom, and we rode it out the rest of the race.”

Jason Feger of Bloomington, Ill., gained 10 spots over 100 laps, including a critical seventh-to-fourth run on the high side after lap-64 restart that gave him a top-five finish in just his second career DTWC start.

“I thought I was going to drive by 'em all for a few minutes,” Feger said of his cushion-banging charge, “and then it just started leveling out and I got back to the bottom and tried maintaining. I knew we were pretty good on the bottom and thought I might be able to beat 'em down there. But the longer I stayed down there, the tighter I kept getting ... fourth place at this deal, to survive that against that competition, too, we’re happy.”

Feger, who with winner Brandon Sheppard gave Illinois two top-five finishers at the DTWC for the first time, knew the high side wasn’t the answer to all his prayers.

“I just wanted to make sure we had a good run, and we did that,” he said. “I was hoping to have a late yellow, maybe have a shot to do something up there and make it work. It just didn’t fall that way.”

While Steve Francis of Ashland, Ky., knew entering the DTWC he’d rank second to three-time Lucas Oil Series champ Jimmy Owens in tour points, he remembered there was some bonus money on the line.

The tour also issues five-figure paychecks for the ASi Racewear Crown Jewel Cup presented by DirtonDirt.com along with the Sweet Mfg. TV Challenge presented by E3 Spark Plugs, where Francis was still battling Owens. Owens ended up fifth in his No. 20, but Francis wasn’t sure where the champion was running in the late stages.

“I hadn’t seen the 20 on the board, so knew we were pretty legitimate at getting some of that extra money, so it’s kind of dumb to drive that car into the wall on a move that you don’t know that’s going to work or not,” costing him a chance at bonus money.

Would he have jumped to the high groove if there was a late-race caution? Probably not. “My heart wanted me to go up there and do that — my head was telling me to go ahead and be sensible,” Francis said with a laugh.

Francis said a last-second decision to run a softer-compound tire on the left-rear help him rally from his 15th starting spot to second, but his pacing could’ve been a little better.

“I had saved too much at the beginning of the race, and was a little conservative and picking my spots. And then at the end, I think when me and (Jackie Boggs) got to racing each other that hard, we used a little bit up, and then we could match (winner) Brandon (Sheppard) lap-for-lap. We just couldn’t do anything else with him.”