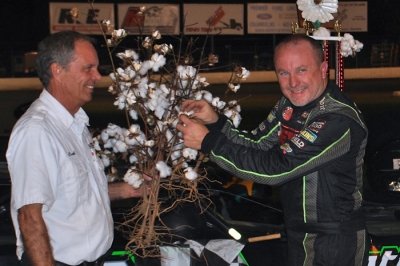 COLUMBUS, Miss. (Oct. 12) — The first 90 laps of Saturday’s Cotton Pickin’ 100 main event might as well have been a walk in the park for Jimmy Owens. The final 10 laps weren’t so easy.

Owens of Newport, Tenn., dominated the majority of Magnolia Motor Speedway’s unsanctioned special event before having to turn back a hard-charging Billy Moyer Jr. of Batesville, Ark., amid heavy lapped traffic late in the race. With the track locking down in the bottom groove over the final 10 laps, Owens kept his No. 20 machine glued to the inside lane and survived Moyer’s furious late challenge to earn $20,000 in winning the Cotton Pickin’ 100 for the second straight year. Sidebar | Video | Slideshow

“The track had locked down and rubbered up and I knowed they were gonna run in there and catch me,” said Owens, who built nearly a half-track lead while mostly running the track’s high groove for the majority of the race. “We were all lined up around the bottom there those last few laps and there just wasn’t nowhere to go. I just hunkerd down and held on.”

Moyer settled for second at the finish after advancing from the eighth starting spot. Bobby Pierce of Oakwood, Ill., also advanced forward throughout the race, climbing to third at the finish while John Blankenship of Williamson, W.Va., started and finished fourth with polesitter Eric Cooley of Fulton, Miss., fifth.

Owens was in a league of his own for most of the distance. Starting from the outside of the front row, he easily jumped out to the early lead over Cooley and quickly built a comfortable advantage before the first of the race’s three cautions waved on lap five.

Owens built more than a straight advantage as the race ran green until lap 24 and again pulled away after only a few laps following the race’s final restart with 26 laps complete.

Deftly handling slower traffic, Owens stretched his lead to nearly a half-track distance through the race’s middle portions until Moyer reached the second spot and began to chase him down around lap 60.

Moyer chipped away at Owens’ lead lap after lap and began to make more noticeable gains around lap 75. It was clear Owens was fading when sixth-running Randy Weaver of Crossville, Tenn., unlapped himself on lap 85 and quickly pulled away from the leader.

By lap 90, it was also clear that Moyer would catch Owens before the end of the race as Owens reached a long line of lapped cars lined up around the track’s dominant bottom groove.

“When Randy got by me there, I knowed then it was time to get be getting down,” Owens said. “Those last few laps we were all just stacked in there and I wasn’t about to step out. He would’ve had to move me to get by me.”

Moyer didn’t attempt to move Owens and instead looked to drive around him when he reached his back bumper with three laps remaining. But the move out of the dominant low lane proved ineffective as Moyer slid high and let Owens slipped away from him. Moyer settled for second in matching his best-career Cotton Pickin’ 100 finish.

“I thought we could make it exciting,” Moyer said. “When I got to his bumper, I kinda inched out one lap. I was just trying to feel my way out there, but there just wasn’t nothing there. I probably could’ve got him if I would’ve went in there and doored him, but I don’t race that way and we’re happy with second here tonight.”