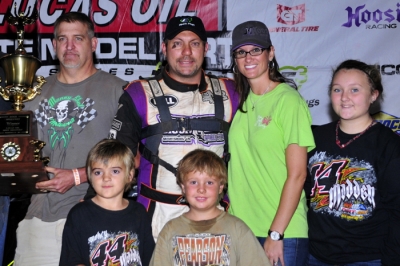 Starting from the outside pole, Madden, who led the majority of last year’s Dixie Shootout suffering a broken wheel with three laps remaining, led all 50 laps this time around to claim his third Lucas Oil Series victory of the season and the fifth of his career. | Video | Slideshow

"After what happened to us last year, leading ... and not winning, this feels great," said Madden, 38, of Gray Court, S.C. "The car was so good all night. I told (chasis builder) Scott (Bloomquist) I didn't know what to do to the car for the feature. It was very easy to drive, and that's a scary feeling going into the feature, because you want to change something. But you don't want to mess up anything."

Madden's Bloomquist Race Car was solid from start to finish. Ogle made a late-race charge and closed to within a car-length with five laps to go, but Madden pulled away in the final two circuits as he headed for his 10th overall victory of the season.

"I tried to be smooth and not wear out the tires. Lap-traffic wasn't too bad tonight, and everybody gave each other plenty of room,” Madden said. “To win this race in front of this crowd is just tremendous. It's the biggest crowd I have seen here since I have been coming to race at Dixie."

Ogle's charge to the front began when he broke into the top five by lap eight. He overtook Bloomquist to move to fourth on lap 18 and two laps later made a great move to pass both Dale McDowell and Weaver to take second. His strong run around the track’s bottom groove allowed him to close on Madden during the race’s closing stages, but he fell short of catching the leader.

"This track and Rome (Speedway) are probably my two favorite tracks to run on,” Ogle said. “We really were hooked up on the bottom, and we got a great run into the corners and out of them. With about five to go I thought maybe I had a chance to catch (Madden), but I had some difficulty with lapped traffic, and it sort of hurt my momentum. We got real close there one lap, and I was hoping he might slip up, but he didn't.”

Weaver, who was looking for a clean sweep of the racing activities, ran second for several laps until finally yielding that position to Ogle on lap 20.

"He (Ogle) was really fast on the bottom; I couldn't hold him off, with only one caution,” Weaver said. “I really didn't have time to get settled down. We are thrilled to get a podium finish here, and we will keep coming back until we can win the Shootout.”

Notes: Madden’s Bloomquist Race Car is powered by a Clements Racing Engine with sponsorship from Century Plastics, Hamricks of Gaffney, Cushman Paint and Body, Henderson Amusement, Hoosier and Ohlins Shocks. ... Frank Ingram slowed on the third lap to bring out the race's only caution. ... Madden’s previous 2013 Lucas Oil victories came at Volunteer Speedway in Bulls Gap, Tenn., on Aug. 22 and Cherokee Speedway in Gaffney, S.C. on June 21. ... Owens competed in his backup car after experiencing motor issues in hot laps. ... Steve Francis, Owens' closest pursuer in the Lucas Oil chase, finished 15th. ... The series moves to Rome (Ga.) Speedway on Sunday for its penultimate event of the season paying $10,000 to the winner; Owens will enter with a 175-point lead over Francis atop the standings.