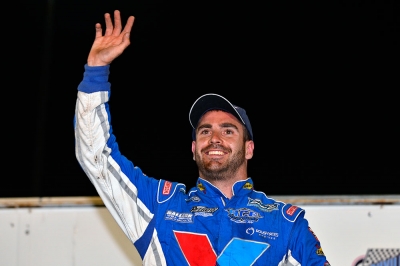 The 25-year-old Richards overtook Brandon Sheppard on a lap-eight restart, then turned back a few challenges from Darrell Lanigan of Union, Ky., en route to a 25-lap victory worth $7,000 on the first of three nights of racing at the half-mile oval better known for its sprint-car action.

“I feel like we have a really good car for maybe Saturday night, but we’ll definitely take the win tonight,” Richards said after his sprint to the checkers. “It was tricky getting through (turns) one and two. I’d push sometimes and I’d get loose sometimes and kill a lot of momentum, but it was a lot of fun.

“I could hear (Lanigan) down there. I knew if I slipped up a little bit, I knew he’d probably be there. We’ve still got a little bit of work to do, but our guys did a great job.”

Using the extreme low groove in turns one and two, the sixth-starting Lanigan nearly pulled alongside the fourth-starting Richards on more than one occasion, but the Union, Ky., driver ended up settling for second. Jason Feger of Bloomington, Ill., advanced six positions to finish third, drawing close to the frontrunners in the final laps.

Dale McDowell of Chickamauga, Ga., started on the fourth row with Feger and finished fourth, accruing the most points in the track’s unique system that sets the line up for Saturday’s $40,000-to-win finale.

Lucas Oil Late Model Dirt Series competitors run another $7,000-to-win program on Friday with drivers getting a chance to better McDowell’s point total and earn the pole position for the 100-lapper.

Lanigan, his car sometimes tilted when he climbed the inner berm between turns one and two, couldn’t quite overtake Richards, and one of his best chances as erased by a caution flag.

“We had a pretty good ride there; just came up a little short,” the 43-year-old Lanigan said. “Track position means a lot. It’s hard to pass those good cars once you get 'em in front of you. But the car was good. I’ll be glad to see 100 laps here.”

Richard and Lanigan made it a two-car battle most of the race, but Feger drew closer in the final laps, finishing just five lengths behind Lanigan in third.

“That’s definitely the best we’ve ever qualified here, heat-raced or ran a feature, so definitely we’ll sleep better knowing we’ve made (Saturday’s finale) and should have a decent starting spot no matter what happens,” Feger said. “The track was pretty demanding tonight. It was really fast up there.”

Sheppard started on the pole and rode the high groove to a comfortable lead early, stretching it out to nearly a full straightaway by the fifth lap. But after a lap-eight red flag and cleanup, Richards dove underneath Sheppard in turn one to take over.

Trying to answer on the high side, Sheppard got too high exiting turn two and had to check up to avoid getting into a tricky spot in the backstretch fence. He slipped back to fifth while Richards, Lanigan, Jared Landers and Feger slipped by.

Landers was next to fall victim to the tall guardrail fencing, getting too high between turns one and two and getting brushed by Frank Heckenast Jr. before he got rolling again, far out of contention.

From then on, it was a Richards-Lanigan battle with the World of Outlaws Late Model Series regulars taking the spotlight on the rival Lucas Oil Series.

“It feels good. ... we’ve finished second twice in the big race,” Richards said. “Hopefully it’s our weekend, but there’s  a lot of good cars here, and I’m sure they’re going to step it up, too.”

Thursday’s first slowdown came on the seventh lap for a lengthy red flag after Eddie Carrier Jr. and Joel Callahan tangled back in the pack with Jimmy Owens and Dennis Erb Jr. getting caught up in the turn-three mess. Erb’s car was towed off the track while Owens drove away but had significant damage. Callahan also retired.

Two more yellows appeared for single-car incidents. Scott Bloomquist slowed on the frontstretch with apparent rear suspension problems on the 14th lap and Frank Heckenast Jr., who ran as high as fifth, got into the turn-two fence on the 17th lap. Heckenast was towed off the track.