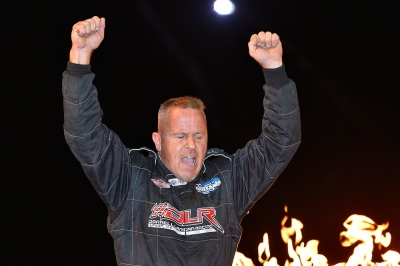 Both World of Outlaws Late Model Series regulars took advantage of front-row starting spots to lead their respective headliners from flag-to-flag, but their roads to Victory Lane were far from easy. | Complete World 100 coverage

McCreadie, 39, recorded his long-awaited first career Dirt Late Model win at the high-banked, half-mile oval in the event reserved for the evening’s odd-number qualifiers. He grabbed the lead from the pole position at the initial green flag and was never headed in a caution-free race, but he barely outlasted the late-charging Gregg Satterlee of Rochester Mills, Pa., who swiped the runner-up spot from Jeep VanWormer of Pinconning, Mich., on the final lap.

Lanigan, 43, raced off the outside pole to capture the feature for the even-number qualifiers after surviving mid-race challenges from John Blankenship of Williamson, W.Va., and Jared Landers of Batesville, Ark., and outrunning fellow WoO traveler Shane Clanton of Zebulon, Ga., in the final circuits.

McCreadie credited his successful performance to an 11th-hour tire-compound decision he made with his Sweeteners Plus team. Going with soft rubber proved to be his ticket onto Eldora’s famed winner’s stage.

“We got lucky,” said McCreadie, who finished third in a preliminary feature on Thursday night. “We were one of the last guys through tech (prior to lining up for the A-Main) and we waited and we waited – and (then) we saw that tiller get out there (to work on the track surface).

“After watching all those heat races 20s (Hoosier LM-20-compound tires) were way faster than 30s, so we just put a couple on and we held on. We were dying at the end, but with no yellows it was just nice to get out there in clean air and be by myself.”

McCreadie maintained a small advantage over Steve Francis of Ashland, Ky., throughout the race’s middle stages, but over the last five tours his edge shrank. The battle for second between Francis, VanWormer and Satterlee was fierce, however, and might have prevented one driver from running down the leader.

Satterlee, 29, slid by VanWormer for second off turn two on the last lap and noticeably closed the gap on McCreadie’s Warrior car rounding turns three and four, but McCreadie was able to hang on to win by 0.776 of a second over the rising Keystone State driver.

“I know we got work to do for a hundred laps because we faded,” said McCreadie, whose career-best finish in six World 100 main event starts is a seventh, in 2005. “But we’re gonna be damn happy tonight.”

“We went with three hard tires and right before we went out they watered the racetrack,” said Satterlee, who started fourth but struggled for most of the distance. “We weren’t really where we expected to be for the first 20 laps or so, and then that middle came in and the track kind of got back to where it was. Then the car got to doing what we planned it to do.”

VanWormer, who won a preliminary feature on Thursday night, settled for a third-place finish after starting second. His car’s right-rear corner was damaged when he clipped the outside wall off turn two on lap eight while battling for second with Francis.

Francis slipped to fourth at the finish and six-time World 100 champion Billy Moyer of Batesville, Ark., started and finished fifth.

Lanigan, meanwhile, was able to find the prime line around the famed track to keep his Rocket mount at the front of the pack in the nightcap. He secured his first victory at Eldora since the 2006 DIRTcar UMP Nationals.

“We had to move around a little bit and find a couple different grooves,” said Lanigan, who was threatened early by Blankenship and Landers but never let Clanton get close enough to make a serious bid for the lead during the race’s second half. “The car was really good on the bottom, but then we kind of started losing grip down there so I moved to the middle and actually the car got better there.

“Unbelievable car,” he added. “We’ve been working on this car – this is the same car we had at the Dream (where he was involved in a hard heat-race crash), so we had to fix it some. It’s unbelievable now.”

Clanton, who won Thursday night’s second preliminary feature, slid past Blankenship and Landers in successive laps to reach second place following a lap-11 restart but ran about one second behind Lanigan for the remaining distance. The former World 100 and Dream winner’s bridesmaid run gave him the best combined finishes of all drivers who competed in the preliminary events.

Two caution flags slowed the second feature. The first came on lap 11 when Duane Chamberlain of Richmond, Ind., blew a tire and was hit by Dustin Linville of Bryantsville, Ky. Later, on lap 16, Brad Neat of Dunnville, Ky., slowed entering turn one.

Jason Feger of Bloomington, Ill., was the fastest qualifier in Friday night’s multi-car time trials with a lap of 15.770 seconds. His circuit ended up being the fastest of the two nights of time trials.

With Saturday night’s six 15-lap Dream heat races aligned by each driver’s best lap time from the two rounds of qualifying, Feger’s overall fast time earned him a visit to the Eldora stage during Friday’s program to spin the inversion wheel. It stopped on ‘6,’ setting up a 36-car invert and leaving Feger with the sixth starting spot in a heat race that will transfer the top-three finishers to the World 100.

The World 100 weekend will conclude on Saturday night (Sept. 7). The first heat is scheduled to get the green flag at 7 p.m.