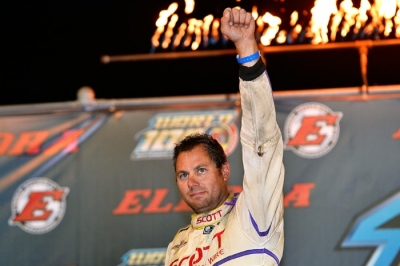 With the UMP DIRTcar-sanctioned event’s 112-car field split in half by time-trial results, Van Wormer captured the caution-free first main for odd-numbered qualifiers and Clanton added another flourish to his sparkling record at the Big E in the nightcap reserved for even-numbered qualifiers. Both drivers cashed $5,000 paychecks for their triumphs.

A fan favorite well known for his hard-charging style on the high-banked, half-mile Eldora oval, VanWormer vaulted from the third starting spot to the lead at the initial start of the first feature and never looked back. He led every lap of a race that was completed in just under seven-and-a-half minutes.

Bub McCool of Vicksburg, Miss., was able to draw within a few lengths of Van Wormer as the leader worked lapped traffic in the final circuits, but didn’t make a serious bid for the top spot. The World of Outlaws Late Model Series regular settled for a career-best Eldora finish of second driving a Chad Stapleton-owned car.

Van Wormer, who has cut back on his normally busy racing schedule this season to focus on work commitments (Thursday night’s feature marked just his 16th start of the season), said he hopes that his checkered flag kicks off a memorable weekend at Eldora. He has started the World 100 seven times since 2004 with a top finish of third on two occasions, in 2006 and ’08.

“I would hope so,” Van Wormer said when asked if he feels his Rocket machine is capable of winning the World 100. “At least I know kind of where to go with my car a little bit. It definitely felt good tonight.”

Clanton, 36, demonstrated his Eldora acumen in the nightcap. He started seventh but was up to second behind Dustin Neat of Dunnville, Ky., when a caution flag flew on lap two. He followed Neat until another caution period, on lap seven, provided the restart opportunity that put the Georgian in front for good.

“I knew I was a little better than (Neat),” said Clanton, who assumed command as lap eight was scored. “I was just biding my time there because we went on a little softer tire than I think they did. The main thing is just getting the lead and getting clean air on the nose where it’ll stick and you don’t slide.”

Brian Birkhofer of Muscatine, Iowa, overtook Neat for second on lap 15 and restarted alongside Clanton after Neat slowed to bring out a caution flag on lap 18. But Birkhofer only briefly challenged Clanton when the green flag flew for the final time, ultimately finishing several car lengths behind the victor in second place.

One of just five drivers to win both the World 100 (2008) and Dirt Late Model Dream (2012) crown-jewel events at Eldora, Clanton feels good about his chances of capturing the $46,000 first-place prize awaiting Saturday night’s World 100 winner.

“We struggled the past month,” said Clanton, whose last victory was a WoO feature June 1 at Stateline Speedway in Busti, N.Y. “We tried a lot of different things and come back to the basic setup we won the Dream with last year. It’s working pretty good right now.

“If the car’s like that (on Saturday) I can (win the World 100). When it drives that easy, it’s easy to be aggressive with the car and make moves early in the race. I ain’t had a car since the Dream that I could do that with. Hopefully everything will keep going our way.”

Ky Harper of Tiffin, Ohio, was the fastest qualifier in Thursday night’s multi-car time trials with a lap of 16.811 seconds. But after the 23-year-old spun a “3” for the heat-race inversion he failed to qualify for a main event.

The World 100 weekend continues on Friday night (Sept. 6) with a second preliminary night of competition. Time trials will once again split the field into two groups for heat races, consolation races and 25-lap features that will pay $5,000 to win.

Heat races for Saturday night’s World 100 will be aligned using each driver’s best qualifying lap from time trials on Thursday and Friday, putting plenty of importance on the second round against the clock on Friday night.

Hot laps are scheduled to start at 5:30 p.m. on Friday with time trials to follow. Racing will get the green flag at 8 p.m.