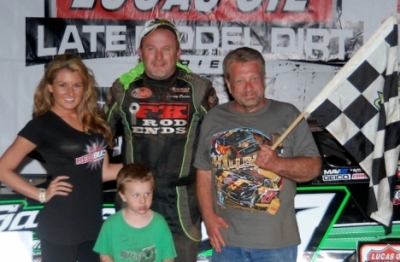 Taking the lead when polesitter and race-long leader Dennis Erb Jr. of Carpentersville, Ill., slowed with engine woes on lap 61 of the 100-lap race, Owens of Newport, Tenn., controlled the remaining distance on his way to earning his third victory in Lucas Oil’s ASi Crown Jewel Cup presented by DirtonDirt.com.

"I saw Dennis smoking for a long time. I wanted to pull up beside him and tell him to save the motor and not damage it,” said Owens, whose previous victory in the Carl Short-promoted event came in 2008 at Tyler County Speedway in Middlebourne, W.Va. “I feel bad for them, they work so hard, and they had a good car. I am not sure if I could have ever gotten around him. He has led so many of these crown jewel races and he is going to get one soon.

"I really like this place; its racy and the fans get to see a great show. I want to thank Carl Short for putting this race on. We have been on a roll this weekend; let's hope this continues.”

While he mostly cruised once out front, the victory didn’t come without some drama for Owens. He avoided near disaster early in the race when Shaver clipped the rear of his car entering turn one on a lap-25 restart. The contact provided the race's most dramatic moment as Owens went spinning in front of the field and triggering a mad scramble with drivers taking evasive action. Owens’ car spun completely around before contact from Pearson helped it to keep moving. No drivers stopped on the track and all were restored to their previous running positions.

Francis advanced into the top five midway through the race and ran among the leaders in the second half. He challenged Owens on multiple restarts after climbing to second but couldn’t keep up in the closing laps.

“I think we had the second-best car the whole race. Jimmy had us covered there,” Francis said. “The racetrack was so slippery you just had to be careful how you picked your spots. Shaver and Earl got by us there, but we were able to get by them. We could run with Jimmy for a couple laps, but it just seemed like he was a tenth-a-lap better.”

Erb led the first 60 laps of the race and appeared to have one of the strongest cars in the race from the start. But Erb's machine began smoking heavy during the middle stages of the race, allowing Owens to close the gap. With Erb’s car slowing badly, Owens went by for the lead exiting turn two on Lap 61. Erb finally slowed in turn four on lap 62, bringing out a caution as his night ended abruptly with mechanical failure.

Notes: Owens drives a Cornett-powered Bloomquist Race Car owned by Mike Reece and sponsored by Reece Monument Company, Sunoco Race Fuels, Red Line Oil, Gantte Appraisals and Midwest Sheet Metal. ... Owens earned his third victory of at least $25,000 on the tour this season; his previous came in the Lucas Oil Speedway’s Show-Me 100 and I-80 Speedway’s Silver Dollar Nationals. ... The feature went green just after 10:10 p.m and was slowed by 13 cautions. ... Scott Bloomquist slowed while running third on the 80th lap. ... Eight cars piled up in turn three on the third lap; all drivers were able to continue after suffering only minimal damage. ... Fast-qualifier Walker Arthur spun off turn four following contact with Mike Marlar while battling for second in the first heat. ... Randy Meador retired for the evening following a rollover accident in time trials. ... I-77 hosted the Carl Short-promoted crown jewel for the second consecutive season. ... The Lucas Oil Series returns to action with a doubleheader weekend Sept. 20-21 with the Ralph Latham Memorial at Florence Speedway in Union, Ky., and the Jackson 100 at Brownstown (Ind.) Speedway.