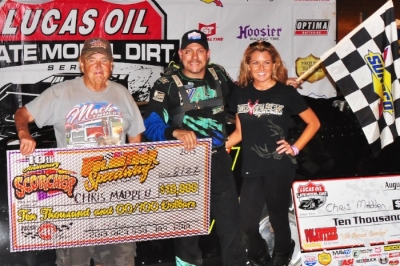 Madden held off defending Scorcher winner, Billy Ogle Jr. of Knoxville, Tenn., to win claim a $10,000 payday for his second series win of the season. Ogle ran within striking distance of Madden over the second half of the race, but Madden proved to be too strong on the high-banked, high-speed 4/10-mile oval. | Slideshow | Video

"That was a demanding 50 laps,” said the 38-year-old Madden, who backed up his top-five finish in last week’s Comp Cams Topless 100 at Batesville (Ark.) Motor Speedway. “Joe (Loven) gave us a heck of a racetrack tonight; I thought it was in better shape tonight than it has been in a long time. I slowed up for a little bit, and I couldn't figure out why I was so loose getting into the corners.

"I had a great race car tonight, and we just picked up where we left off at Batesville last week. We made a few adjustments and the car was awesome from the time we unloaded it.”

The most serious incident occurred when series point's leader Jimmy Owens of Newport, Tenn., slowed on the frontstretch with a flat tire on lap 12 and several drivers piled-up in turn two. Don O'Neal of Martinsville, Ind., tumbled down the track. O'Neal received precautionary medical attention at the track and later visited a hospital in Indianapolis, Ind., Friday morning for further observation.

Ogle, who claimed his first career Lucas Oil Series win with a surprise victory in last year’s Scorcher, made the move for second when he past McDowell on lap 24 and then hounded Madden the rest of the distance. But he fell short of repeating his feat from 2012.

"I tried to cut the corners on him, but he was just too strong tonight,” Ogle said. “I thought maybe starting on the front row, we could win this race two years in a row, but it wasn't meant to be. Congrats to him on the win.”

McDowell had to fight off Bloomquist over the last part of the race to finish third, once again coming up just short of victory.

"I had a good race with Scott tonight and held him off,” McDowell said. “We are going to keep digging and get us a victory soon."

The Lucas Oil Late Model Dirt Series takes a night off before returning to action on Saturday with the Whiskey City 50 at Lawrenceburg (Ind.) Speedway. The event pays $10,000 to the winner.

Notes: Madden’s Bloomquist Race Car is powered by a Clements Racing Engine with sponsorship from Century Plastics, Hamricks of Gaffney, Cushman Paint and Body, Henderson Amusement, Hoosier and Ohlins Shocks. ... Madden earned his second victory of the season at Volunteer; the first came in Southern All Stars action. ... Madden’s previous Lucas Oil Series victory came June 21 at Cherokee Speedway in Gaffney S.C. ... Owens finished outside the top five in a Lucas Oil event for the first time since July 17.